What's the world coming to?

I brought mum to my dentist for a second opinion yesterday. The X-ray couldn't reveal much but my dentist did what she could with the infected gums and advised her to see a root canal specialist if the problem is not resolved. At least she did something. Mum's own dentist simply sent her off without even touching her teeth and charged her for consultation.
Mum likes my dentist alot because she takes pain to explain alot to mum about the condition. I hope it is simply a case of infected gums and nothing else. I don't want her to sit through a long and painful root canal treatment.
.
It was almost dinner time after I sent mum home. CH and I decided to do away with the Friday outing, so we all had a pizza cum TV night at home instead. I called Pizza Hut while driving home so that I could return home to piping hot food. We had the Super Supreme Viva pizza and Super Hawaiian Supreme pan pizza. 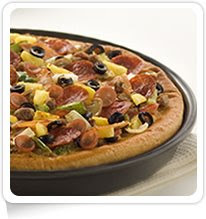 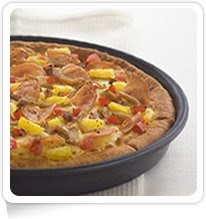 When we were living in the farm, Pizza Hut wouldn't deliver to the house, so it's been years since I ordered pizza. I still love the buttery crust of the pan pizza compared to their newly introduced viva crust which smells really fragrant but lacks the rich and satisfying bite of the pan crust.
.
I also ordered the sweet and spicy chicken drumlets and garlic bread. Somehow a pizza meal is not complete without these. I love how the chicken is seasoned and how soft and buttery the garlic bread is. CH brought Tiramisu, which tasted slightly odd and kept us wondering if it was the rum or the cream that had gone sour. 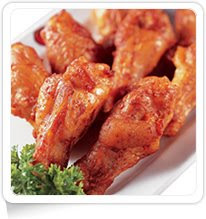 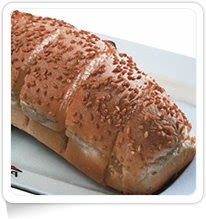 Food pictures lifted from Pizza Hut website.
We sat around the TV and watched the Nanny, SpongeBob and Ghost Whisperer after dinner. I know YK treasures moments like this the most. He's always bugging me to watch his favourite shows with him but I tend to fall asleep or get distracted with housework. I dozed off a little while lying on the couch but managed to catch the entire show without missing the important bits. I like watching Jennifer Love Hewitt in her chic outfits!
.
We woke up to a sunny Saturday morning. It's a nice change after a series of wet mornings. Yesterday, two cars nearby skidded and rammed into a tree in morning.
.
As usual, the newspapers is full of gloom and doom. They've now discovered that the two most popular brands of biscuits here are now banned because of melamine content, amongst them is Julie's peanut butter biscuits, one of my favourite snacks.
.
I also found out that Nissin cup noodles had caused a woman's tongue to go numb after consumption in Japan. Nissin has recalled all the cup noodles as well. I recently bought 2 packs. The kids don't like cup noodles, so thankfully, they're still in the pantry. I threw all the banned products away.

Then I sat in the garden reading the papers and eating sweet potato and yam for breakfast, thinking about my dad who must be doing the exact same thing 30km away. How wise of him to abstain from processed and unhealthy food. It's a good thing some of his good habits have rubbed off on me.
.
Sometimes our parents really know best. Yesterday I was showing mum some of the nasty rashes that have developed on my legs. She asked "Have you been using Fab washing detergent?" Indeed! I started using Fab detergent last Sunday and the rashes developed soon after. Apparently she suffered from the same problem decades ago and found that she was allergic to Fab.
.
Looks like I will have to trash that detergent too!
Posted by Blur Ting at 20:26

Unfortunately, the world is in a situation that we're going to just have to be brave and ride it through... hopefully with no bumps along the way! Pizza... yum... haven't eaten take out in ages!

I hope your mom get's her teeth sorted out. My mom's finally got an appointment to seea better dentist next month. Her one was useless too!

I just realised something TERRIBLe today - your blog isn't on my list of blogs I love. :-O I hadn't noticed. I have fixed that dreadful error!

BTW the food looks yummy. Here near us there's a Thai place that does these hot spicey chicken wings... now I feel like some. :-P see? my tongue's hanging out.

JY - Hey you should order Pizza Hut delivery too! They used to have so many ads on TV with a catchy jingle "2-3-5-3-5-3-5 Pizza Hut Delivery!" that the number's ingrained in everyone's head.

Michelle - Yah, with age comes alot of little problems with the body that need sorting out. I hope you mom will get her dental problem resolved too. It can be such a pain.

Oh thank you for adding me! I forgive you :-) Have a nice weekend.

Oh dear...hope your Mom doesn't need a root canal. Such an arduous experience if she does need it. I've had a friend having to go through it and it's really crazy and expensive.

Therefore, if you wanted to specifically look for CNN News,
it is right there in its own directory on the front
webpage. Some Local News papers/journals/ tabloids/Magazines focus on regional happenings and target local audiences/ readers.
They’re the real Mc - Coy and are as old as the date on their front page.
Some say it would have, because there is an ongoing collaboration between the two groups
in attacks on Israel. Thats why Indian Hindi papers are very popular in all corners of India.

Djelloul: The Mafia has been portrayed in many ways in books and movies,
and I don't have a quarrel with these portrayals, because the Mafia is a work of many facets. This is a growing and profitable market with the increase in ability for all types of business- large or small - to do business in an international platform and other is National Newspaper Networks combine newspapers from several States within the USA. Today, Most of newspapers are offering their online editions. Newspaper companies should be seeking to have subscribers to their service where breaking news can be emailed and send to blackberries and cell-phones. Newspapers internationally are becoming more than ever like a television network providing current breaking news stories.