I'm working from home this morning and will only go to the office after sending YK to school at 1pm. Since the kids are at home, I walked to the market to get some fresh chicken to make lunch. YK deserves a hearthy lunch before sitting for his history paper today.

When mum was still in good health, she used to cook soy sauce chicken for YK because she knows it's one of his favourites. So when I was cooking this morning, I naturally thought of her. I used to think that we're pretty invincible as long as we lead a healthy lifestyle but seeing how age and illness have destroyed her well being, my perspectives of life have changed.

It started with acoustic neuroma which led to the loss of hearing in one ear. After a series of radiotherapy to control the growth of the tumour, her life is never the same again. Instead of getting better, it's been going downhill. Last weekend, she spent most of her time lying on the couch like an invalid. Her doctors claim that her quality of life should improve after treatment but it has been a year and I see no light. Sometimes I wonder if it is old age or the side-effects she's suffering from. Maybe's it just her body constitution. She's only 71 with many years ahead of her but she's not looking forward to that.

The soya sauce chicken is now simmering and producing all kinds of wonderful smells. I've added in chunks of potato and carrot, dried mushroom, hard boiled eggs, soy bean curd and dried soy bean sheets to make a healthy dish, just like how mum would cook the dish. 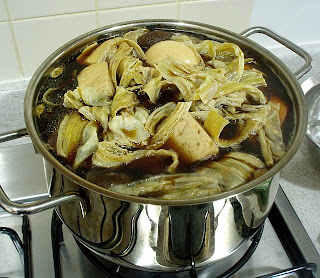 Sorry to hear about this. Sometimes we don't know why things happen, even though we try our best to live a healthy, balanced life.

Like my Dad, too...I can see him deteriorating slightly than before...getting more forgetful and from what I hear, his logical mind plays tricks on him these days. So if he's asked something, his answer is sometimes not valid.

I only hope that if God should take my parents, they wouldn't suffer much and that I'd be able to go back to say goodbye.

Amel - You're right. Seeing someone you admire who used to be so strong and healthy becoming this way is really a heartache.

Ohhh. I do miss her too.
As we get older and older, we tend to remember mom more and more when we cook.