I sent Harry to the groomers today. It's a first for me. I've never kept long-haired dogs. It's simply not practical to have them at the farm.

By now, you would know that Harry has been abandoned outside our gate and is now under our care. The farm life is turning the once pure white pedigree into a tangled mop, so the fur has to go before he develops skin problems.

Harry is really happy at the farm. He's very much the alpha male like Rusty. Harry can be so bossy. In fact, he quickly filled the void left by Cookie's departure. He struts around the farm with his head held high, barking at the workers or Bodhi when he's annoyed.

Bodhi reminds me of the meek Cookie. He is eating well and has grown so much in the last few weeks, he's a handsome young chap now and towers over Harry. 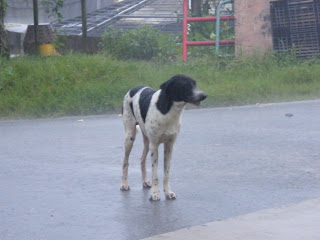 Until now, he still keeps his distance and will only come close when we call out to him. In fact, he prefers to get drenched in the rain than seek shelter in the porch. Maybe he's just too used to living and sleeping in the open field. It's fine when he's young and healthy but surely he can't go on living like this.

Bodhi is such a gentle giant. If only he is more courageous, so Harry will not bully him.
Posted by Blur Ting at 06:06

It's interesting to see that pets and humans alike have clear personalities even from such a young age. It's REALLY hard to teach a meek youngster to stand up for himself (just in the case of my friend's son who was bullied in his ex-school).

Glad to hear that, there are good soul out there to take care of abandon animals!

When i was young, i use to tell my mother that - "when i grow up i will buy big land to accomondate abandon animals".... sadly i haven't done that....

I like dogs and glad that both dogs are doing well! Like Amel said, it is really interesting that animals also have distinct personalities...

Amel - Yes, they do. If you spend enough time with them, you'll realise they are so human in many ways and much more intelligent than what people think.

It's funny when I brought Harry back from the salon. He looks so naked now with his fur shron really short. When I carried Harry out of my car, Bodhi ran over and for the first time, came very close to sniff Harry. He was very curious because Harry looked so different.

Of course, Harry got annoyed and growled at Bodhi to get lost.

Malar - You have a good heart. I'm just lucky that my parents are very understanding and we have a big area to keep the dogs. I have been bringing animals home from young, my parents are quite used to that!

JY - Like you, I have a soft spot for dogs too!