The long drive to Punakha

The two days of temple and cultural visits were nice but I was longing to be amongst nature. I wanted to see the rugged beauty of Bhutan and taste the clear, crisp air of the mountains.

Yet when I was told of the 6-hour journey along the winding mountainous highway (it's the only way), my face turned a shade of green.

I love traveling but long road trips make me nauseous. It's a good thing none of my friends have this problem so I can sit next to the driver. Everyone knows that if I suddenly go quiet, it's time to steer clear as I'm about to puke.

Even though we spent more than 5-hours on the road, I got sick only once. Still, I was labeled 'the sick lady'. Every now and then, Karma would glance over to check the colour of my face.

For some reason, May Ling is now affectionately known as "Am Boktom", a popular cartoon character in Bhutan. The only way to make the journey more tolerable is to joke and chat with our guide and driver. Karma surprised us with his good English. He kept Phuntshok updated of daily current affairs and caught up on news during his driving breaks.

Staff at the hotels, eateries and even small retail shops are comfortable conversing in English. This is an entire system focused on language development and they place high reverence on teachers.

During the week, we saw kids walking long distances to get to school. Public education is provided free of charge so no child is denied the opportunity to study. English is taught as a major subject in all the schools.

Geographically, Bhutan is enveloped by India from the east to west and south. Over the decades, Bhutan had developed a strong and symbiotic relationship with India, from the supply of basic goods, knowledge exchange, road works, labour and even Indian teachers! Seeing the need to train their own teachers, a new teacher's training college had recently been completed. The campus looked pretty impressive from a distance. 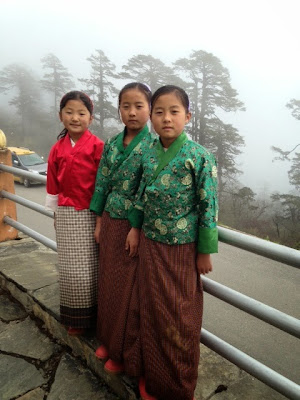 That day, we saw families dressed in their best traditional attire making their way to the temples to mark an important religious event. From what we understood, every single person, even teenagers and young children, goes to the temple voluntarily on such days. That surprised me greatly as I know how difficult it is even to get our own kids to visit their grandparents sometimes.

The people at large speaks well of their monarchy and truly respects the royal family. You could feel the love they have for their King via the warmth and sincerity radiating from their conversations. Local commoners lined the highway wearing their most formal wear (mostly men in gho with a shawl) when they heard the king was driving by that day.

At first we couldn't grasp the concept of road blocks. Phuntshok was always going on about keeping to the schedule to avoid road blocks. When we managed to evade one, he was elated and would give us more time to stretch our legs at the teahouse. 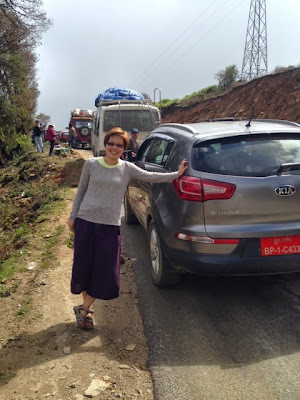 We finally understood that due to the road widening project, parts of the road would be closed to traffic for up to 2 hours at a time. Everything would come to a standstill while excavators dug and loaded waiting trucks with boulders and sand. All this should come to an end by 2018 when the roadworks is completed.


Thanks to his clever planning, we only stopped twice for about 20 minutes. People would get out of the vehicles to stretch, chat or chew betel nut.

We bombarded Phuntshok with endless questions. He has the answers to everything. By the end of the day, we could tell an Indian truck from a Bhutanese one. The Indian trucks are usually loaded with huge pipes for the hydro-electric project. They are battered, dirty and they spew tons of black smoke.

"Karma, let's overtake the polluted truck!", was something I had said more than once. He must have been an F1 driver in his past life. I shut my eyes whenever he overtakes a truck. One mistake would send us plummeting down the cliff. 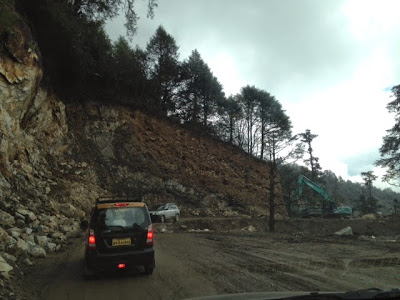 Bhutanese trucks, on the other hand, are a joy to look at. They are clean, shiny and painted with colourful murals and nice slogans. 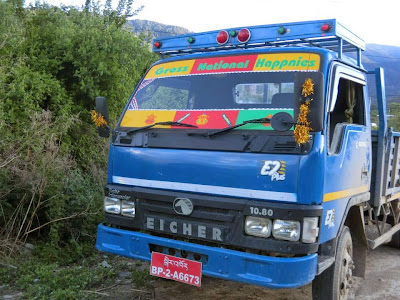 After a bone shaking journey over potholes, loose rocks and negotiating turns, the entire vehicle is caked in mud. I have new respect for our driver who made the impossible seem so easy.

In fact, many locals travel on buses that make treacherous journies across the country which could take up to 4 days.

That morning, we were driving up to Dochu-la Pass (3088m). On the way up, we had to stop at the Hongtsho Immigration Checkpoint. This area is a Tibetan settlement known for their apples. 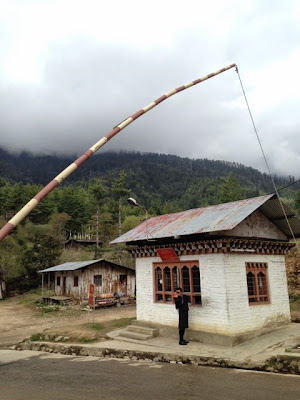 We arrived at the popular Dochula Pass which was supposed to offer a panoramic view of the Himalayan mountain range. On clear winter days, one could see high Himalayan peaks in their full glory. Alas, we could see nothing on this foggy morning. 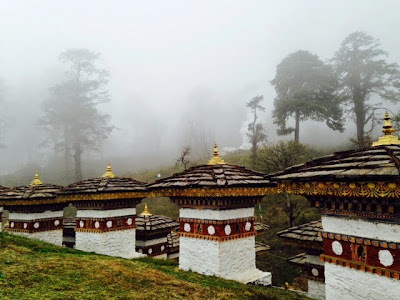 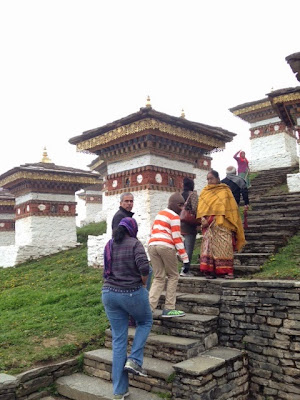 We spent some time checking out the 108 chortens, a popular spiritual destination for locals and tourists. 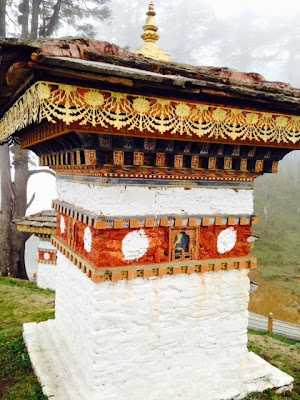 After what seemed like forever, we stopped for lunch at Divine Cafeteria at Panukha. Lunch was served in a room with glass walls that overlook the farmland. The view was amazing and we were quickly enamoured with Bobo, the little boy and his pet cat. 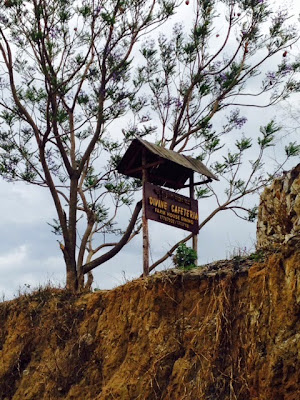 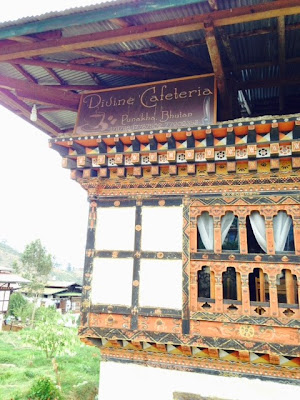 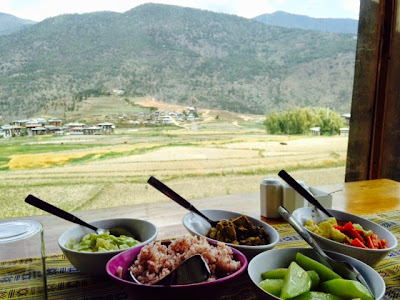 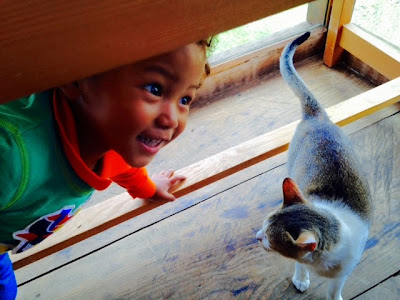 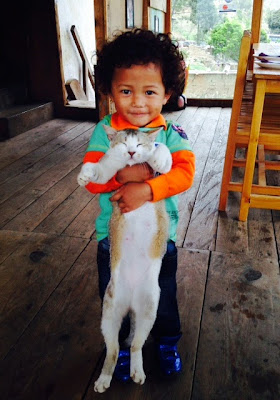 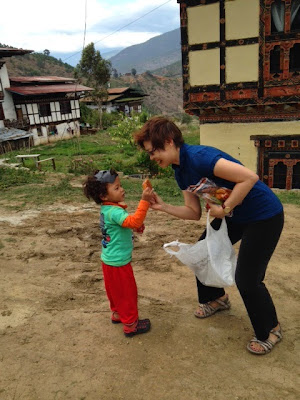