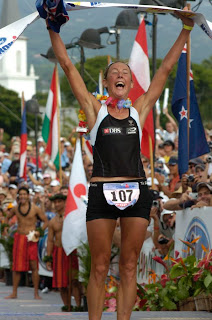 I’m so inspired… by a 30-year-old British lady called Chrissie Wellington who pulled a stunning victory at the Ironman World Championships in Kailua-Kona, Hawaii.

For the clueless, the race involves 3.8km of swimming in the sea, 180.2km of cycling and 42.2km of running and is regarded as the world's most prestigious triathlon race. She finished the race in 9hr 8min 45sec, a good 5 minutes ahead of the runner-up, Canada’s Samantha McGlone.

Wellington’s journey to claiming the Ironman title in Kona has been anything but normal. She did her first triathlon in July 2004 on a 10-year-old borrowed bicycle. Last year she won the World Age-Group Championships – a 1.5km swim, 40km bike, 10km run – in Switzerland which prompted her to turn professional only eight months ago.

She completed her first Ironman just 7 weeks ago in the Standard Chartered Ironman Korea race and won that race, finishing an astonishing seventh overall in the brutally tough conditions.

Despite that impressive result, Wellington arrived in Kona as absolutely no one’s race favorite, even her own. In Hawaii, oblivious to the pre-race hype, she had no idea what her rivals looked like. Unlike her counterparts in flashy sponsored equipment, she wore a $60 race suit bought 3 days before the race, used running shoes bought a week earlier, faulty bike pedals repaired with glue and a helmet fit for a beginner.

But she took the lead late into the bike leg, and never relinquished it on the run. For her, though, the victory is but a stepping stone to realizing a bigger dream – to use sport as a catalyst for change.

Having spent over a year in Nepal managing a water and sanitation project in 2004, she experienced first-hand the power of sport in bringing conflict-affected communities together. For example, with education being voluntary for most refugees, sports programs in refuge schools provide an additional incentive to get young people to school.

“Sport has an amazing power to build bridges, to empower people and to bring people together,” she said. “I want to be able to use my position now to broadcast that message and to really promote the use of sport as development both in Britain and Asia.”

To me, she’s the epitome of a true sportswoman! You go girl!

I've never been a good sportswoman in my entire life. I guess that's just not my forte. So I only exercise to be fit and healthy. I can't imagine myself competing in any kind of sports, though he he...

I read this yesterday, and thought, wow I gotta exercise tomorrow. Well today came, and ohhhhh I'm so lazy!

How incredibly inspiring, Blur. Thanks so much for sharing this woman's story. I'm in awe.