I've just returned from a whirlwind business trip to Mumbai and to be honest, I've never been so happy to be home. Don't get me wrong. The trip was very fruitful and all the people I met were very hospitable but the traffic jams and potholes drove me crazy.

Not knowing what to expect, I packed too many appointments into 1.5 days and ended up rushing from meeting to meeting and getting stuck in traffic. Every cab journey was a stomach churning and nerve wrecking one. There are no traffic rules. You just need lots of skill and courage to drive in Mumbai.

It seems that you're allowed to drive anyway you please, at the fastest speed possible while dodging huge potholes, people, errant drivers, dogs and cattle along the way. It's completely normal to honk incessantly and weave in and out of traffic and stop just inches away from the next car. Strangely, after spending hours on the road, I've not seen a driver lose his temper, even when another car almost comes crashing into his or when a pedestrain saunters across the road, causing him to slam his brake. They're simply the world's calmest drivers! 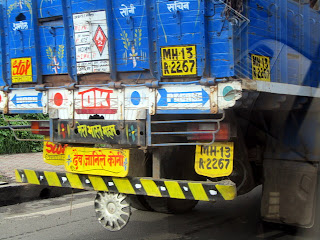 I was so amused to see "HONK OK PLEASE" or "BLOW OK HORN" painted behind every truck. Even my clients who live there are unable to explain the meaning behind these signs. 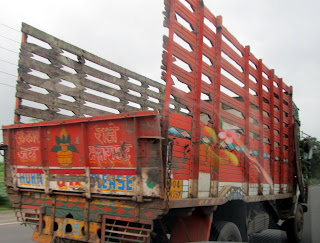 It's not easy being a passenger. I always end up feeling nauseous and had to look away from the traffic to keep myself sane. At the traffic junctions, I'm often confronted by little kids knocking at the window, asking for money or plying their craft. It's sad, yet I had to avoid eye contact especially after hearing my friend's story of how he ended up with a horde of beggars following him after he handed money to one.

Now, I've traveled to some backward countries but by far, Mumbai's situation is the most depressing. The image of a skinny woman holding her naked son with a large bloated tummy still lingers in my mind. And the slums that I saw in the movie The Slumdog Millionare are real. They're scattered all over (old) Mumbai city. Many improvished Indians do not live in proper homes. A shed is almost a luxury considering many sleep under a torn canvas sheet held up by 4 sticks. 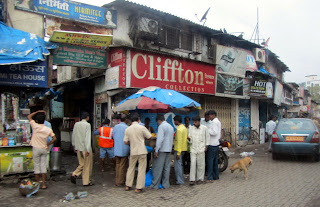 Maybe it has something to do with the Monsoon season because almost everything, from the roads to buildings and surroundings are dark, dirty and gloomy. 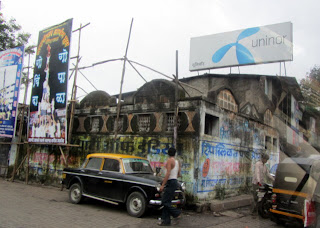 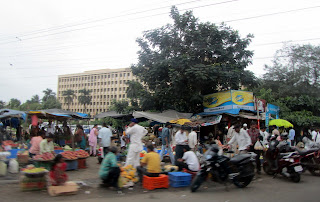 And the dogs... they are everywhere, coexisting happily with the residents, minding their own business and never getting in people's way. 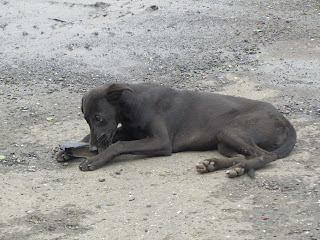 Luckily the place that we stayed in, Navi Mumbai (New Mumbai) is a planned city developed to relieve congestion in Mumbai. It's a more civilised and urban city, and definitely less chaotic and dirty. The 5-star hotel that we stayed in exceeded my expectations and provided me with a comfortable bed after a hard day's work.

There's still room for improvement in Navi Mumbai. While walking under an office building one day, a large metal beam came crashing down from the construction work above, landing just metres away from me. Nobody appeared shocked except me. From the way they drive and cross the roads, they do not seem to have any regard for safety nor do they value their lives. I find that rather strange.

We traveled out of the city more than once to visit the container depots. While the journey was long and tiring, the sight of the lush countryside and hills in the distance made the trip worthwhile. 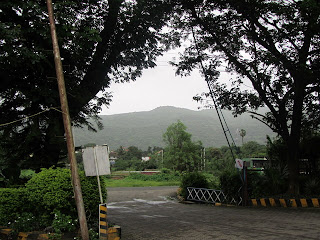 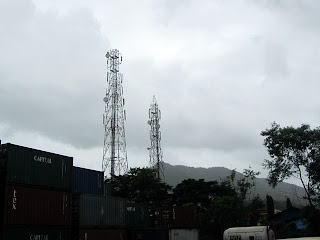 Then I came across this poster at the factory. Isn't it so retro? 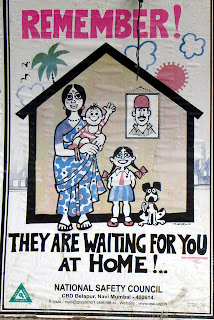 I will never moan again at driving and the roads near me after reading your post! Sounds like an experience! And I can imagine how good it feels to be home. X

Indeed, I appreciate our well paved roads so much more now!

I'm hearing the same set of stories from many ppl who went to Mumbai!
I guess you appreciate your country more now!;)

I've never been to India, and quite frankly, I've no desire to visit the country as a tourist. A ex-colleague of mine from India, once mentioned that she didn't dare to drive her car when the horn didn't work! I was very amused then, cos the horn of her car died on her due to being overused, then the fact that a car w/o a horn is basically useless on the road!

Funny my associate traveling with me said when driving in India, just make sure the horn and brakes are working!