There is something quite alluring about Bako National Park that made me excited to return again. I remember the terrain being varied, making it really interesting to trek. Not many people know about Bako and I feel that the tourism board should promote it as a destination for nature lovers.
Bako National Park is the oldest park in Sarawak, covering an area of 2,727 hectares. It is one of the smallest national parks in Sarawak yet one of the most interesting as it contains almost every type of vegetation found in Borneo.
As it is an island at the tip of the Muara Tebas peninsula, the only way to get there is by a small boat. The jetty is about 45 minutes drive away from Kuching City. 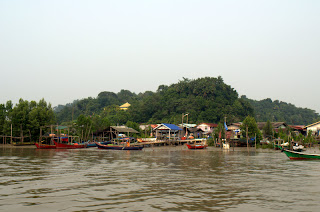 The last time we were there, up to 7 passengers were allowed on board the boat but now they have reduced the number to 5. Our boatman sped off quickly, overtaking the other boats. He was having the time of his life, swerving this way and that. Our small boat was soon riding the waves, bouncing up and down like a roller coaster. Unlike other boatmen, he did not even offer us life jackets. I clung on to the side and prayed that the boat would not capsize. 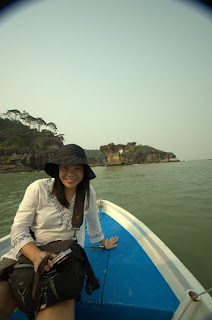 We made a detour to see the most famous landmark in Bako National Park - the Sea Stack of Teluk Pandan Kecil that resemble a cobra head coming out of the water. 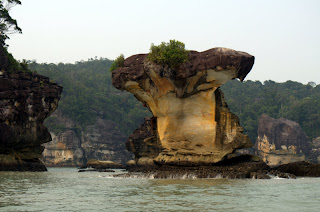 When we arrived at Bako, the tide was very low, just nice for the boat to moar at the jetty. About 30 minutes later, the boats couldn't come in anymore and the passengers had to disembark along the beach. 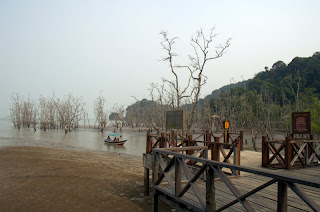 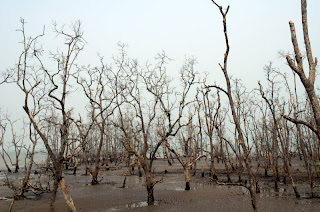 It is mandatory for visitors to register at the park office and pay an entrance fee before entering the trails. 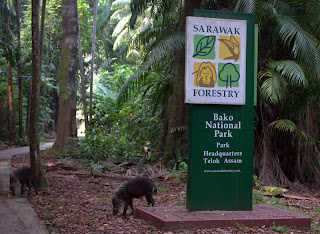 We saw some Bornean bearded pig, distinguished from other wild pigs by prominent bristles either side of its snout, scavenging for food. They're so used to being around human beings, they didn't even bat an eyelid when we walked by. I find them quite cute actually, they seem to be wearing high heels. 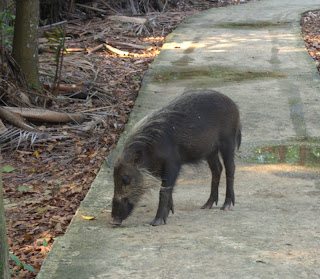 Bako is also home to approximately 275 rare proboscis monkeys, found only in Borneo. There is a fascinating array of animals, including 150 species of birds, few species of monitor lizards, snakes and  nocturnal creatures like the flying lemur, pangolin, mouse deer, various bats, tarsier, slow loris and palm civet.
However, Bako's greatest attraction is the incredible variety of plant species and vegetation types. 25 distinct types of vegetation form seven complete eco-systems - Beach Vegetation, Cliff Vegetation, Kerangas or Heath Forest, Mangrove Forest, Mixed Dipterocarp Forest, Padang or Grasslands Vegetation and Peat Swamp Forest.
There is such an extensive trail system here, you need days to cover them all. We have done the Lintang trail before, so we picked the Tajor (Waterfall) trail this time. It takes 2.5 hours to cover the trail but we mustn't forget about the return journey, hence the entire trail should take us 5 hours. 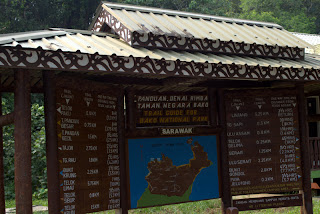 The boardwalk along the coast leads to the start of the trail. 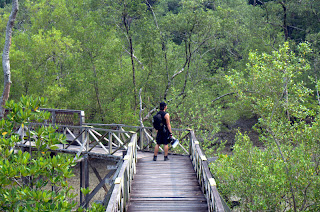 Once we have passed the mangrove vegetation, we entered the forest where the trail begins. 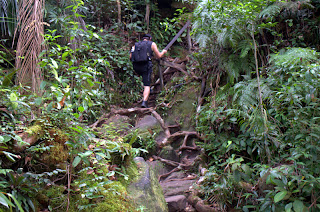 After ascending the forested hill, we reached a plateau covered in scrub vegetation. 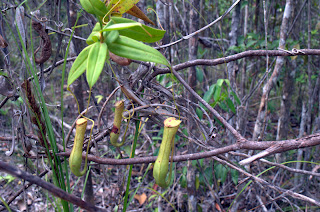 We walked along a sandy path lined with carnivorous pitcher plants.
After baking in the hot sun, we were glad to enter the forested area again. 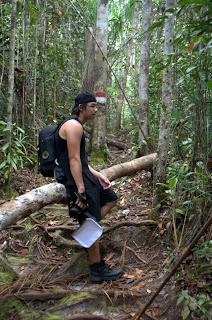 The forested area is shady but filled with obstacles like fallen trees, slippery surface and dilapidated bridges. 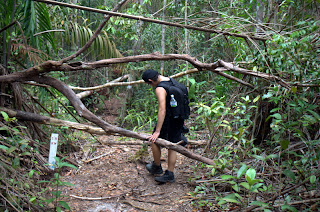 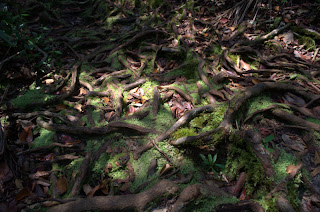 
Besides pitcher plants, there are lots of other fascinating plants to look at like the moss growing on a mushroom.
﻿﻿ 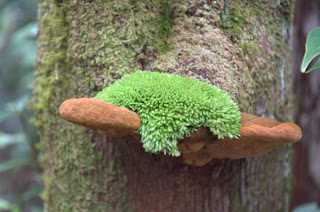 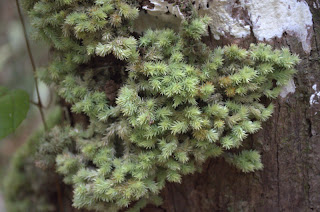 Even though our intention was to visit Tajor Waterfall, we had to give it a miss and head back to the park HQ to catch the boat back to mainland. The boatman wanted to pick us up at 2.30pm instead of 4pm because of the weather condition.
By the time we reached the jetty, the tide was even lower. Our boat was waiting along the beach and we had to wade through shallow murky waters to reach it. 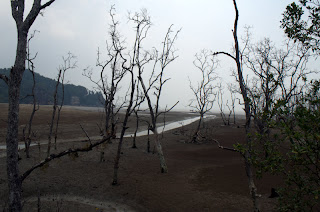 Prior to leaving, we spent some time admiring the beautiful rock formations along the shore. Some of the patterns on the eroded sandstone wall look like modern art. 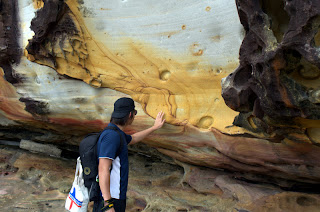 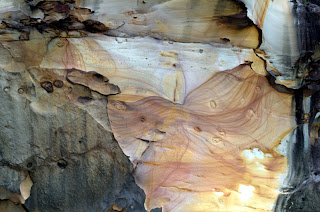 SK spotted some pitcher plants growing on the cliff edge. This species thrive in the harsh and hostile environment. 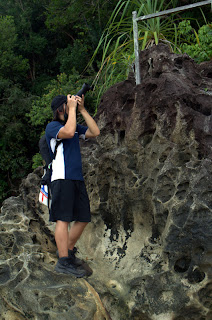 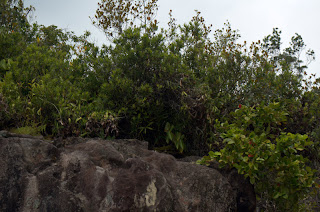 We sped back to the mainland. The boatman's timing was perfect. We missed the thunderstorm. I can't imagine our little boat rocking violently in the middle of the stormy sea.
Posted by Blur Ting at 22:18

what an adventure! I'll love to visit Sarawak too when my kid(s) are older and appreciate nature. Thanks for the pictures!

I am extremely impressed with your writing skills as well as with the layout on your
weblog. Is this a paid theme or did you modify it yourself?
Anyway keep up the nice quality writing, it is rare to see a
nice blog like this one today.