I'm afraid I'm growing old because I'm turning into one of  these little old ladies with so many grandmother stories to tell. Things I see these days simply trigger old memories. Just like when My Sinfonia mentioned about her popular jewelry design called Sabine, my brain went into overdrive.

Now, Sabine has a very special place in my heart. This enigmatic lady kept me on my toes for months. I wanted to know all about her extraordinary romance with Griffin. I even read all her love letters written in perfect manuscript.

Maybe I should tell you that Sabine is not my friend. She is not even real, but she is not simply any character in a story book. To me, she is mysterious and so enchanting, I read their correspondence over and over again, trying to imagine myself in their shoes. After buying the first book, I waited impatiently for the release of the next one. When the final one came out, the unexpected ending left me puzzled and searching for answers.

I had completely forgotten about the books until I heard her name again. It took me down memory's lane, back to the early 1990s. We had just moved to our new design studio, a large bright and inspiring place for creative people to work in. The bookseller came lugging the latest titles, mostly hardcover graphic design books. Intrigued by the postcard design on the cover of Griffin & Sabine, I bought the book.

I'm easily inspired by good design and moved by stories. This book captured my heart completely. At that time, design was our business. We ate, lived and breathed design. In our daily brainstorming sessions, ideas and concepts were tossed around the office like frisbee. Looking back, I miss those adrenalin-charged days. But then we were young and idealistic. I don't have that kind of mental agility now.

As if reminiscing about the old days wasn't enough, I went straight to Amazon to look for the titles. The Trilogy was on sale and I refused to leave the site without placing an order. The books arrived soon after and after admiring them properly, I decided to give the entire set to someone else who will appreciate it as much as I do. 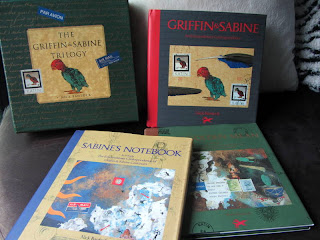 That person is EY. I hope she likes the birthday gift and enjoys the stories as much as I did. 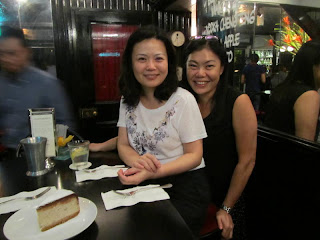 Griffin: It's good to get in touch with you at last. Could I have one of your fish postcards? I think you were right -- the wine glass has more impact than the cup. --Sabine
But Griffin had never met a woman named Sabine. How did she know him? How did she know his artwork? Who is she? Thus begins the strange and intriguing correspondence of Griffin and Sabine. And since each letter must be pulled from its own envelope, the reader has the delightful, forbidden sensation of reading someone else's mail. Griffin & Sabine is like no other illustrated novel: appealing to the poet and artist in everyone and sure to inspire a renaissance in the fine art of letter-writing, it tells an extraordinary story in an extraordinary way
Posted by Blur Ting at 10:09

LOVE romance and correspondence 'coz it reminds me of my own love story ha ha ha...

Question: Are the other three books different from the trilogy box set?

Hi Amel - The trilogy set is more expensive because it is more for collectors. It will be cheaper to buy them separately. The only difference is they are not packed in a box. Everything else will be the same.

You're a romantic Ting.