Gone were the days when I planned trips for the kids. Now, they plan and I follow. If not for SK, I wouldn't have heard of Mount Santubong. His list of desirable places to visit includes the jungles of Sulawesi (which had 2 volcano eruptions this month), Crocker Range of Sabah (highly inaccessible), Madagascar, Seychelles, South America and the Kew Gardens. Only the last one sounds like fun, the rest is mostly hard work.
Both the boys have hobbies which take them into the forest and jungles. That means lots of hiking and in the case of Mount Santubong, hard climbing. It is about 35 km north of Kuching and take 45 minutes to reach from the city centre. On a clear day, the view from the top is gorgeous but it was very hazy when we were there, thanks to the forest fires in Kalimantan.
Though Mt Santubong is only 804m high, the steep climb offers a real mountaineering challenge. The heat and high humidity make the ascend particularly tough. There have been many cases of people getting stranded and had to be rescued. The government has revived a long-standing plan to build cable car here, to howls of protest from the locals.
Luckily we made it there and back without any incident but I must say, of all the treks we had done, this has got to be one of the hardest especially when we each had 5 to 6kg of equipment, food and water on our backs.
We entered the trail from Bukit Putri and headed towards F7. 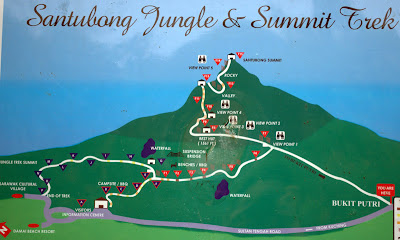 SK spotted some pitcher plants at the start of the trail. 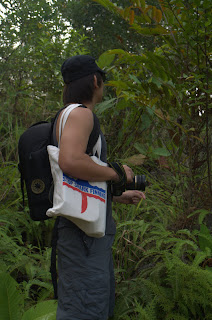 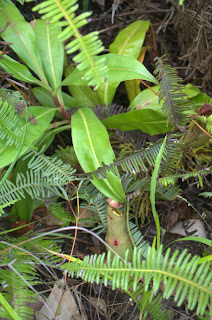 The trail here is incline all the way, pretty relentless if you ask me. 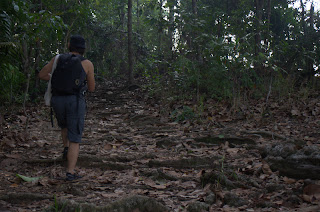 The morning sun was streaming in through the canopy and the humidity level must be around 90 percent. I was dripping in sweat within less than 30 minutes. 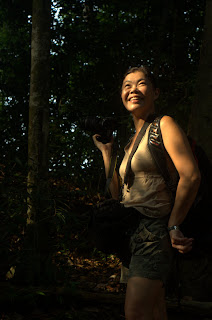 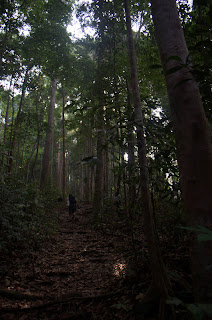 The forest is rich in flora and fauna. There were termintes everywhere, we had to be careful not to step on them. 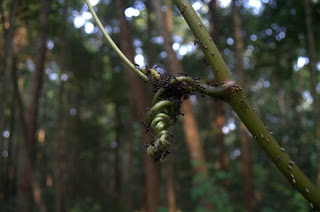 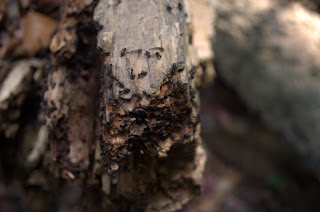 We saw a snake, spiders, butterflies, wild flowers, orchids and moss. Strangely, we did not meet a single person that day. 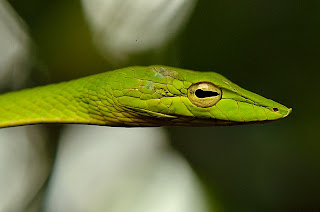 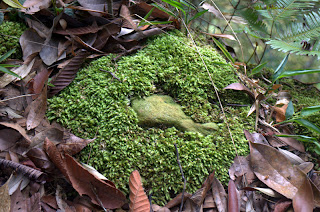 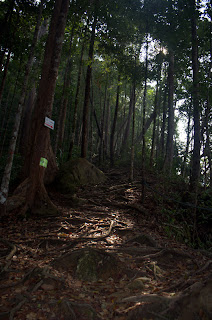 The trail was rocky and covered with tree roots which made walking slow and difficult. We had to use the rope at the side of the trail to pull ourselves up every step of the way. The tough workout made me very hungry. We ate sandwiches and chocolate and were lucky to have no encounter with macaques. 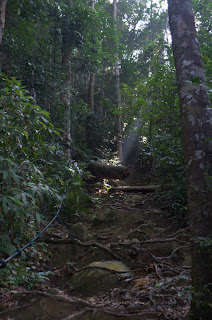 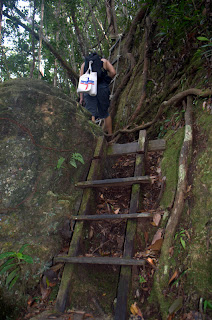 Higher up, there were many vertical climbs. At 90 degrees, rope ladders were installed to help trekkers. 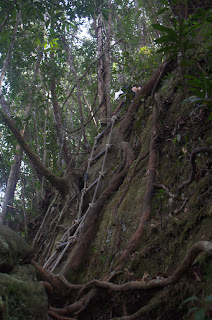 As if the climbs were not hard enough, there were other obstacles like fallen trees and branches to tackle. 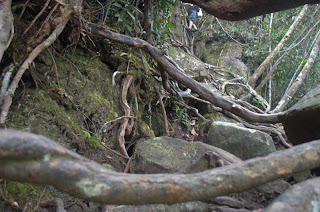 After several hours of climbing, my legs were so tired. When I came to this vertical rope ladder that seem to extend forever, I could feel my knees tremble. SK was already halfway up. 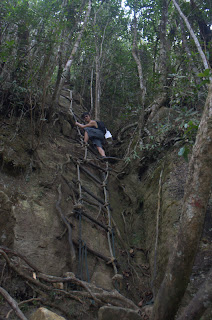 I stood there and surveyed the slope before me. Each step on the ladder was half my body height. I grabbed the rope ladder and made my way up. The ladder swung and clattered against the rock with our every move. By the time I got to the forth rung, my legs were wobbly. I looked down and began to worry about the tough descent. What if I missed a step? I pondered for a while and hollered to SK who was already at the top of the rope ladder.
Yes, I had chosen to give up. We were quite close to the summit but I did not want to risk getting stranded or being a burden if I hurt myself. I have a fear of heights and it was already quite an achievement to have made it so far. 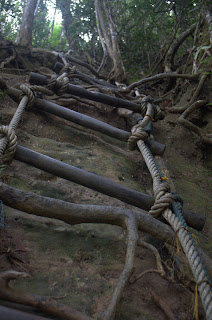 SK came back down and said I made the wise move as he saw more such ladders ahead of us. Then we made our way down. After reaching F7, we diverted to a different trail that would take us to the Visitor Entrance. After walking for 30 minutes, the trail seemed to disappear. It was disappointing because we had hoped to see more pitcher plants here.  Fearing that we had taken the wrong track, we retreated and found ourselves back at the trail that leads to Bukit Putri.
After 6 hours of trekking, we were finally back at the base of Mount Santubong.
﻿
Posted by Blur Ting at 21:59

I am gonna pray real hard that my son doesn't develop a taste for forest trails. That looks positively like torture to me!! Though the pictures are lovely and I quite enjoyed them.

Haha, my friend said the same thing. Luckily she has 2 daughters.

Wah! You are such a cool and FIT mom to climb such a mountain! Your boys will keep you very fit. ;)

Not so fit or I would have reached the summit!

Nice answers in return of this matter with genuine arguments and explaining everything concerning that.


Here is my page - After effects Templates

Very soon this web site will be famous among all blogging
visitors, due to it's nice content