When CH mentioned that he's looking for one nightstand, I completely understand. I mean, he has had the same one for years now, surely he must be quite jaded looking at the same old same old night after night. Like most men, he likes new things every now and then, no matter how sensible he is.

I was even about to suggest going together with him later tonight to have a touch and feel session before making the final decision. The more charming one will follow him home and sit by his bed of course. 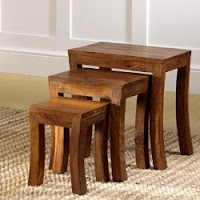 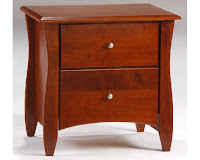 And what sort of nightstand were you thinking?
Jeesh!
Posted by Blur Ting at 00:26

Okie, my 2 cents worth

1. 3 tables => can act a stools if ever CH ;s place run out of chairs for gatherings. But, can;t put much things

2. The stand with 2 drawers => can put things inside the drawers but permanently marked to stay besides his bed.

That is a creative one! =)) If more storage is desired, then one night stand would be a more practical purchase.

I prefer the nest of tables. I used to have 2 "one night stand" before & gave them away cos its taking up space :(

Hahahaha ... And there I was thinking just what in heaven's name is wrong with CH!

A!! threesome's awesome! hahaha! really, they are too cute to forgo leh...

You really got me there. HAHAHA!

Psst, which one did CH buy in the end?

Kaye - Oops, I forgot to do a follow upon this. He finally bought a totally different one. A cute little button of a cabinet with a small door that opens from the front.