Many things in my life didn't go according to plan. Not that I do much planning anyway... Rusty is one of them. He came into our life quite by accident, or shall I say by whim.

We had just moved back to live with my parents. The kids were still young and were suddenly thrown into a different environment and coping with a new lifestyle. There were loads of stuff to explore around the farm. I drove them around the neighbourhood alot to show them life around the farm can be rather 'happening' too.

One weekend, when YK's friend was over to visit, I brought them to Farmart nearby. For the clueless, Farmart has a cluster of small shops selling pets, vegetables and farm produce. We always stopped by the pet store to admire the cute puppies. While interacting with puppies in the enclosures, YK asked, "Can we buy one?"

I surprised myself by saying yes. Even the kids were surprised. Maybe I was feeling sorry for the kids. We've moved so far away from their friends and even their closest playmate/nanny whom they fondly refer to as Kak Kak, had decided to return to Indonesia after working for 8 years.

We already had a mongrel called Spooky at my parent's place. It didn't even occur to me to seek my parent's permission or if both dogs could get along. The excited kids started choosing the cutest one in the litter that had just arrived from Australia. I wanted something small and rugged. A dog who loves the farm life. More importantly, I didn't want to end up with a house full of fur or my parents may throw us out.

Rusty was the most inquisitive and active one. He also had the most irresistibly cute face. Within minutes, the boys became proud owners of a little puppy. At first they named him Felix but by the end of the day, we had settled on Rusty. I think the name suits him better.

Mum was a little surprised but not exactly too thrilled to see our latest acquisition. Afraid of hearing a lecture, we told her we paid a special (low low) price for him. When dad came home, he said he could even get a free one from a dog-breeder friend. Oh well, too late. Rusty was here to stay.

Of course Rusty was the object of adoration all day long. While I was out for a business dinner that night, I received a frantic call from YK. Rusty was choking and throwing up. YK was sobbing, "Mummy, quick hurry home! Rusty is going to die!"

My business associate who had reared several Jack Russells in the past assured me Rusty must be choking on shredded newspapers. Indeed, he was so right. Rusty was tearing up his newspaper bedding the whole time. The kids removed the papers and soon Rusty was sound asleep on his rug. 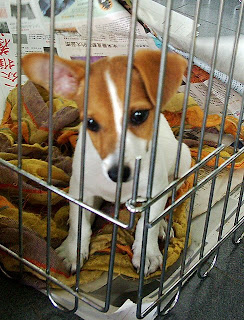 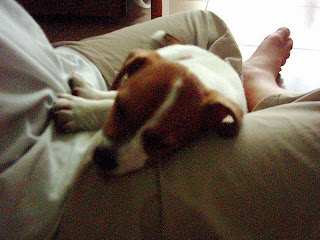 I must admit that I m afraid of dogs coz of a childhood incident but seeing photos of Rusty made me feel that they re not that scary.

oh, i love the big ears! i so wanna see Rusty! *WIDE GRIN*

fry - Yah, he has big ears lor, for a Jack Russell. And his ears are erect too!

Oh he is so cute that I will eat him - haha! There's nothing beats a little cuddly puppy for making one smile. THank you TT for making my day!

Fry- when I'm cranky, Rusty is cranky too!

EE -yah, so cute and tiny you know!

Good thing you didn't name him Felix because it means 'cat'.

They wanted the name Felix cos of Felix the cat. Don't ask me why!

My curiosity is satisfied.... Thanks. =)