It was by sheer accident that we ended up in Tiong Bahru Estate. Our original plan to check out the latest mall in town was foiled by the heavy flow of traffic into the city. No wonder! The Great Singapore Sale has just started!

We're not big shoppers and we hate the crowd, so we continued driving along the highway without a Plan B in mind. The next exit brought us to Cantonment Road which led us to Tiong Bahru, one of the oldest housing estates in Singapore.

There's something about Tiong Bahru that appeals to me. Perhaps it is the old world charm or the laid-back ambience, I particularly like the art deco post-war architecture of the low rise flats. Built in the 1950s and 1960s, they are starkly utilitarian in appearance and design, featuring spiral staircase (I like!), round balconies and flat rooftops.

It has a rich history too. Not many people could afford to live in the Tiong Bahru Estate during the pre-World War II years. It was the choice place of living for the upper class and also the place where the rich and powerful kept their mistresses. For this reason, the estate used to be known as Mei Ren Wuo (“den of beauties” in Chinese).

Somehow, walking along the narrow road flanked by 4-storey buildings during sunset reminds me of some residential estates I had ventured into in France and England. I don't think many people could see any resemblance except me because I have a fertile imagination!

Today, people flock to Tiong Bahru for the huge array of restaurants. We're not the type to drive for miles in search of the best food in Singapore, so we walked into the nearest coffeeshop. As it turns out, we had stumbled upon Ah Chiang's Porridge, famous for cooking porridge over charcoal fire. Our friends were just talking about it recently.

I had a meat ball porridge while CH ordered century egg porridge for himself. The wait staff fumbled with our order and served a mixed-organ porridge which we rejected. They also forgot to bring our order of raw fish salad which we decided to forgo in the end.

While waiting for the porridge to arrive, we had some spicy smoked duck from a new food chain that's sprouting across the island. It was surprisingly delicious! I like the spicy marinade, tender and slightly chewy texture of the duck wings. It would have been a perfect accompaniment for beer. It's funny how such nostalgic food is making a comeback in our food scene. 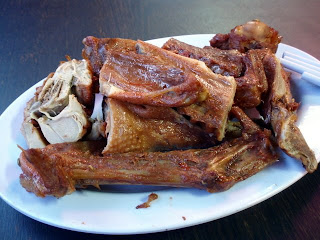 The porridge was good too, especially the meatballs. I don't think I've tasted any bad porridge so far. Afterall, what can possibly go wrong with porridge? Apparently CH has had lousy porridge before and he's not even a fussy eater! 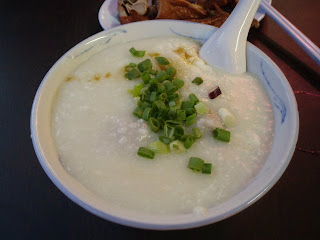 We walked around the quiet estate after dinner. I remember Tiong Bahru used to be more vibrant and busy in the past. Even the Tiong Bahru Market and Food Centre, chockful of good food stalls, was not very busy last night.

While walking, I told CH that I would have led my life very differently if I were a single woman. I would probably live in an apartment in Tiong Bahru surrounded by quirky furniture and books. Instead of driving an SUV, I would zip around on my colourful Vespa. I would buy butter cake and freshly baked bread from the old-fashioned confectionery. Can you imagine a little old lady tottering around in sneakers? That would be Blur Ting!
Posted by Blur Ting at 22:19

hehheh! Vespa is so u! hmmm...yes, i can quite visualise the idea of you zipping abt with a cutie helmet and bags of goodies dangling on the handles of your apple green vespa...wheeeeeeeee! =))

So me right? Don't forget my goggles, the kind worn by fighter pilots during World War II!

Oh, I like porridge. A friend and I have been trying different methods to make porridge, and surprising it is not easy. A good porridge is easy to make, but a perfectly cooked non-cantonese porridge isn't easy to make :)