Shanghai thru the years

This is my fourth trip to Shanghai in less than 10 years and I've seen massive changes in this city. The progress and transformation is amazing, it's almost like visiting a new city each time I'm there.

I'm not the type who love big cities with gleaming skyscrapers. I prefer an older city steeped in history and culture and I feel Shanghai is losing that old world charm too quickly. Not surprising really for it has been described as the "showpiece" of the world's fastest growing economy.

I saw a different side of Shanghai when I was visiting a friend 6 years ago. Like me, he was just starting out in our industry. As a young man struggling to make a living, I could see the hungry, ambitious streak in him. All day long, he drove me around in his beaten up van, manoeuvring along mud tracks riddled with potholes to far flung locations where we looked at containers and factories with ancient production facilities.

The roads were narrow and extremely busy, filled with an endless stream of bicycles. Tons of them. So much so that it was impossible to cross the roads safely amidst the mayhem.

Soon, I was coughing badly because of the dust and smog. He brought me through a little improvised settlement to buy cough medicine and bottled water, feeling apologetic for the decrepit conditions he had subjected me to. Little did he know that I was enthralled with the journey, I even felt privileged to venture into the inner city and witness the side of Shanghai hidden from the world's view. Needless to say, that visit left a deep impression.

When I returned to Shanghai 3 years later with CH, the same friend came to pick us in his sedan. He had progressed and found a foothold in the industry. This time, I could sense his pride as he brought us sightseeing in his new car before treating us to a nice dinner at a posh restaurant.

Like him, Shanghai's economic progress had stepped up yet another notch, boasting an array of eccentric skyscrapers along the riverside. The residential market was also booming along with the economy. Modern apartments and condominiums were jostling for space in the crowded city. In my eyes, Shanghai was a massive work-in-progress.

I returned to Shanghai in October 2007, this time to attend our agency meeting. We stayed in a nice hotel near the Bund and walked to our modern office building nearby. I remember walking past beggars and untidy old shops along the way. The weather was cool and pleasant and the pace wasn't so hurried but the disparity between the rich and the poor bothered me. You can read about it here.

The Shanghai that I just visited this week has undergone yet another round of transformation. The entire city is gearing up for the World Expo 2010. Roads are cleaner, old buildings are being refurbished, new ones are coming up, the beggars have disappeared from the streets and even the bicycles are gone!

It's almost shocking to see the amount of construction going on in this depressed economy. According to my friend, the government has awarded these residential construction projects to stimulate the economy. The apartments in the city certainly don't come cheap!

If there is one thing that is constant in Shanghai, then it must be the pollution. Coupled with the heat and humidity, the problem seemed to have gotten worse. The poor air quality made me feel like I was trapped in a huge glass bowl. While the residents seem to be oblivious to the low visibility, I cannot imagine living in a city like this for the rest of my life.

I met up with my friend again before I flew off. This time, he insisted on buying me coffee at Starbucks. He looked contented and seemed well-off. He now lives in a new apartment in the city instead of the noisy, shanty town he once brought me to. He has made it in the land of opportunities.

Here are some photos taken several days ago: 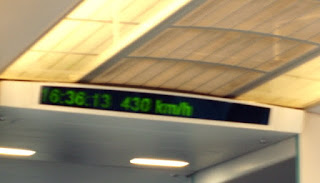 As usual, I took the Maglev train from the airport to Pudong. The 30km journey took merely 10 minutes. 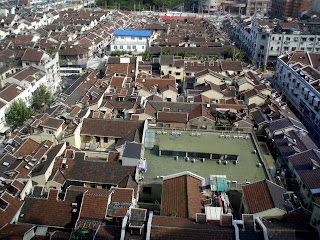 This is the view from our office. I took the same view in 2007. These old buildings have been preserved and spruced up. 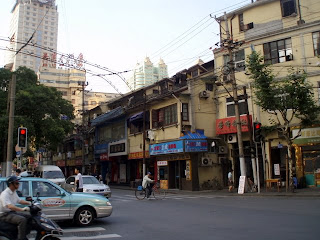 The lack of bicycles on the road was rather alarming. Maybe they have a better public transportation system now. 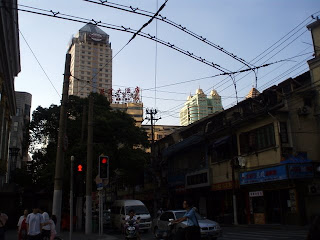 The public buses are still powered by overhead cables like the ones above. 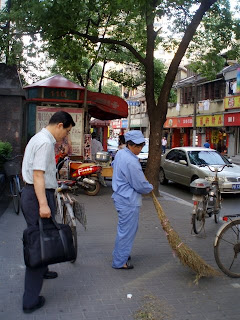 The road sweeper was using a roughly made bamboo broom to sweep the sidewalk. The funny thing is, each time she swept, the leaves from the broom fall off and scatter all over! 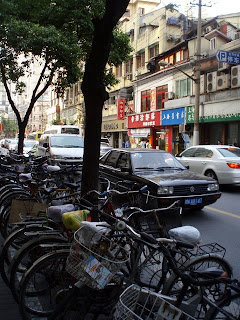 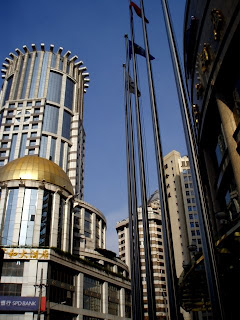 View outside our hotel. Hi Blur, how's going? It has been long time that i've not commented on your blog. I ve just read your post about Shanghai.
Do you know, what i read from somewhere i don't remember now is, Shanghai is a city which dips eveyryear 1,5 cm down because of the skyscrapers. Have you ever heard something like that?

i love Shanghai whatever!
As you know "Better city better life" (it was the slogan of this city, isn't it)

By the way,yesterday i've posted my wedding gown try on pic. I'm sure you'd like to see how i look like in it.

Hi Blur, I love SHG too... btw, is it OK to let me know the name of the meeting u attended? reason pse see

Interesting to read about this...I've never been to many places...a friend who lives in Holland visited Hong Kong sometime ago and she was also shocked by the amount of smog there was there and couldn't imagine living there.

I remember one friend's hubby from the US was shocked by the smog in Indo when the plane was about to land in Jakarta. It's just interesting to read different travel experiences...

Hi Burcu, yes it is true that the city is sinking but still the construction hasn't slowed down one bit! It's a fast growing city.

And I've taken a peek, you look gorgeous!

Auntie Lucia - I'm the S.E.Asia agent for a UK based leasing company. They are the ones who have an office registered in Shanghai, not me. I'm just an agent, and we were there to attend our yearly meeting.

Amel - Most asian cities are rather polluted. Sadly in Singapore, most of our pollution come from the burning of forest/farm land in Indonesia. The winds carry the ash into our island and it gets really bad towards end of the year.

Yes, I heard about the wood burning pollution that spread to Singapore. :-((((

I visited various sites but the audio feature for audio songs existing at this site is in fact fabulous.

Check out my blog post: Beats By Dre Pro