I've been having this dull pain inside my left arm for several months. The pain becomes acute only when I'm removing a tight fitting blouse, otherwise I forget it is there. Lately the pain became more pronounced, radiating to my elbow. That was when I decided to get it treated before it gets any worse.

I stepped into an acupuncture clinic for the first time in my life today. The Chinese physician looks about 65 to 70, with a kind face and gentle manners. He speaks with a lilting Chinese accent that soothes the nerves.

I sat before him and rattled off like a person who has suffered enough. He listened carefully and checked my pulse. Then in a calm voice, he told me to stick out my tongue. He looked pleased and gave a slight nod before saying, "The pain could be due to rheumatism or you could have pulled a muscle. It can be resolved very quickly. You're still young afterall."

I was told to lie on my side. In a short while, he was sticking little needles into my left arm. He's so skilful, I could hardly feel any pain. They were like little ant bites. Well, 10 ants biting to be exact.

The next 10 minutes felt like forever as I didn't dare to make any movements. Maybe I was bored but I could feel an aching pain creeping in. I shifted my focus on the ceiling fans whirling above to take my mind off the needles. When I heard him shuffling into the room, I was relieved but instead of removing the needles, he stuck two thick glass cups onto my shoulders.

This is a process called cupping, a part of Chinese medicine for thousands of years. The general idea is to create a partial vacuum inside a cup, which is then placed on the skin. The suction on the surface of the skin from the cup stimulates blood flow in the area, relieves congestion and inflammation in the muscles and opens up pathways to eliminate toxins.

So now, I have 2 cups and 10 needles sticking out of my arm. Somehow my mind starts to focus on the pulling of the skin, I stop feeling any pain from the needles.

After about 10 minutes, the physician removed the cups and some needles. Then he made me stretch my arms this way and that several times until he was satisfied I had done enough. Of course it was painful and I was rather reluctant to cooperate.

What a relief when he finally removed the last few needles. I left the clinic with two packets of Chinese herbs to brew into a bitter concoction.

I was advised to return for two more sessions next week. Before I left, I asked him if he could treat my eye bags. His reply was not very encouraging, "Well, it can be done but it'll take time. It's part of aging you see." (read as, "You're not that young afterall!") 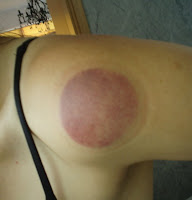 Aftermath of the cupping session.

Somehow my arm feels much better now. I can swing it up and down, back and forth without feeling any pain. I think he has finally solved the problem but I should still endure two more sessions just in case.
Posted by Blur Ting at 21:57

Ouch! still, no pain no gain...least, it works! btw, nicely toned arms leh, even with the bruise...they look gd! must have been the result of your daily workout of housechores n plantings. must take note.hehe.

With dull pains down the arms, esp down left arm, best get cardiologist to check if there are any blockages be4 trying alternative treatments...

Glad that you're now feeling better.
I can't move my arm in a certain way too... maybe I should try out acupuncture when I'm there sometime in the future

Auntie Lucia - It did occur to me at first but as time went on, I am quite sure it is a pulled muscle because it gets worse whenever I lift heavy stuff. I am known to lift these heavy things and it has happened to my chest muscles before until I went through mammogram etc just to be sure it wasn't breast cancer!

Amel - Wow, your mum does cupping herself? It's a first for me actually.

Petunia - I've more or less ruled out it is not related to the heart but if it persists after treatment, I shall heed your advice.

MH - Sigh, with age comes lots of little ailments. But then again, you're still young. Have a look at it when you get the chance before it gets any worse.