I used to be politically apathetic. In my opinion, our political scene had never been that exciting as we hardly get a chance to vote. I had only voted once since I turned 21!

The political landscape seems to be changing. This time round, 82 seats out of 87 will be contested in the Singapore General Election. Everyone in the street is talking about the election and the mood is infectious. There is no lack of political rallies to attend. I found myself reading voraciously about the parties and even attended the Workers Party's rally at Bedok Stadium last night. It was my first! 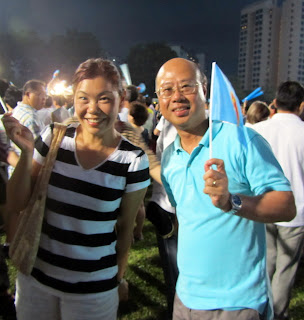 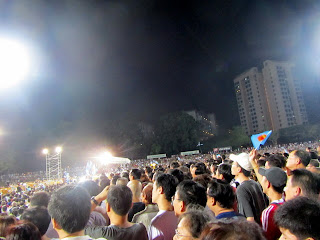 The turnout was massive and everyone was in high spirits, it was almost like a rock concert. Supporters came hours ahead to secure a good spot. There were cheers and shouts of approval throughout the 3-hour rally. 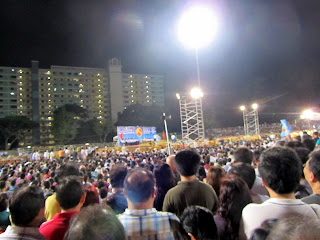 My back started to ache after standing in one spot for hours, so I left before the rally ended. Big mistake because I missed the speeches made by the best speakers. Still, it was a really interesting experience, I'm glad I was there.
Posted by Blur Ting at 02:01

When I was a kid, my mum too was a political activist, for the PAP when the PAP was considered "no-no" by the English speaking colonialists and pro-colonialists like the Progressive Party. The wheel may yet turn again? But probably not on May 7.

World - Yes, it was fantastic!

Wen-ai - Really? Aiya, disappointed. I hope it'll be different this time too!

Auntie Lucia - Wah, you were exposed since young! Your knowledge is really good.