It's been a busy day. In between work and deliveries, I stopped by the Singapore Garden Festival, visited a friend at TTS Hospital, had lunch with CH, brought mum to Singapore General Hospital and rushed home to prepare dinner.

My colourful coleus plant was picked by NParks to be exhibited as a 'potted beauty' at the Garden Festival. In return, I was given 2 pairs of tickets to the show and a gardening book (1001 Garden Plants in Singapore).

Incidentally the primary school that I volunteer for also won a bronze medal for their school garden. The teachers are so pleased, they will use the prize money to buy treats for the kids. Much to my embarrasment, I am now known as their garden angel. 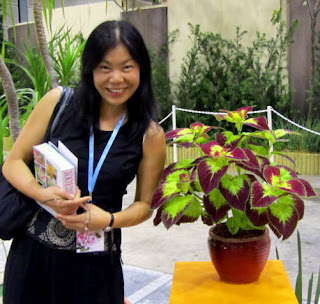 The show opens tomorrow and the organiser has pulled out all the stops to make this show a stunning one. Unfortunately I didn't venture to the area that features award winning works of art from landscape and fantasy gardens to floral displays. I will be returning to admire the designer gardens. Meanwhile, here's a sneak preview of some of exhibits. 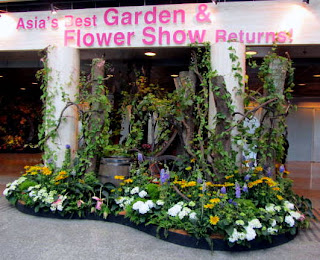 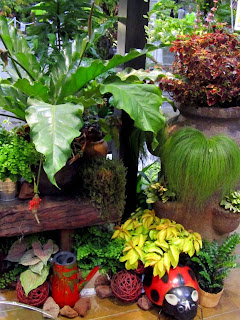 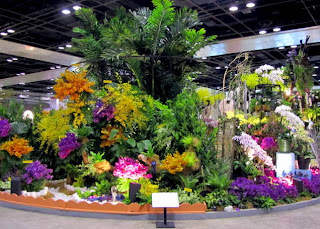 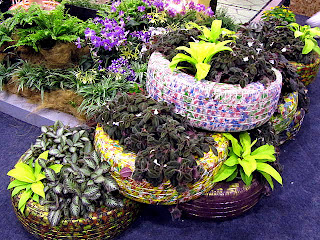 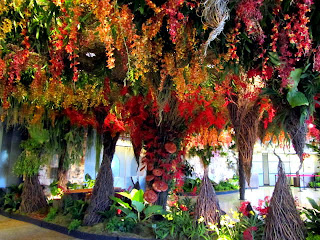 After the quick stop at the exhibition, I went over to see our friend Yvonne who underwent brain surgery yesterday. It was good to see her in good spirits. This is her second surgery and I hope it will be the last one. She's only 32 and what I really want is to see her partying and having fun instead of lying in the hospital bed worrying about brain tumours.

I was in another hospital later in the afternoon. This time I brought mum for her annual checkup. The MRI scan showed that her brain tumour had shrunk but revealed another small one that had gone undetected all this while.

"Nothing to worry about. It's small and hasn't grown any bigger since last year". The doctor was rather nonchalant about it.

Even mum was surprising calm. "No wonder I've been having these headaches...but I'll just have to live with it. I'm already so old."

I, on the other hand, was nonplussed. How can it go undetected after so many MRI scans? (Doc says they had been focusing on one area all this time, not the entire head) How will it affect my mum? (Doc says it is too small to cause any ill effects). What should we do now? (Nothing. Schedule another MRI scan in a year's time).

I am beginning to wonder if many of us are walking around with tumours in our brain without even knowing it.
Posted by Blur Ting at 06:32

The garden show is quite something. And you are one great garden angel.

On the other hand, I'm sorry to hear about your mom.

Tumors are living cells. They can spread, and if you take the "captain" out, it is natural that others will grow and become more prominent. All of us, living beings, have inflamed cells in our body, due to a wide variety of reasons. Our body fights inflammation naturally, but sometimes it just can't deal with it all, again due to a wide variety of reasons. These inflamed/damaged cells are living things, they can send out signals to the nearby blood vessels and say, come, grow new blood vessels to connect to us, give us nutrients and get rid of our waste. The process which the blood vessels respond to the signal and connect to the damaged cells is called Angiogenesis. Now with nutrients and oxygen, the damaged cells grow, reproduce, just like all living things in nature. They grow to form lumps or tumors; and usually when "outside force" comes to take the most prominent one out, others will start to grow/spread/becomes another leader. All living things... live. And in order to live, some give life to others, while others take life. It is simple, yet can be so overwhelmed.

wow, your coleus plant is so beautiful. I have a couple of pots but they are always dropping their lower leaves and I wonder why? Will be visiting the festival tomorrow and will keep a lookout for your potted beauty.
Sorry to hear about your mum and wish her all the best of health.

MH - Yah, tumours suck. They cause nothing but misery.

Ji - The plant is displayed at the NParks Indoor Garden area on level 4.

Mine sheds too, especially the lower leaves. Maybe it is normal for them to do that.

'Doc says it is too small to cause any ill effects.'

So let's wait till it gets bigger? Hmm……

Perhaps there's no harm in getting a second and third opinion? Two out of three?

Anon - At her age, the docs don't really want to do any surgery or radiotherapy unless absolutely necessary. So they will leave it alone unless it grows aggresively. From the past experience, treatment comes with another set of side effects as well.

Ting, Your coleus is really pretty! same like the you! ;-))

Sorry about your mother. Hope the tumor won't grow and stay as it is..

Thanks Malar. You are very kind :-)

Hope your Mom's next scan will turn out fine.

And CONGRATS on the potted beauty and the school garden's getting bronze medal.