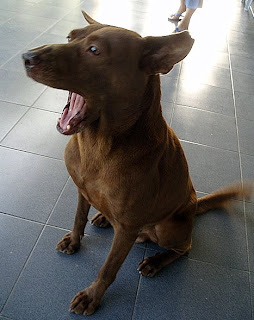 I never knew Cookie's death could make me so so sad. We've had many dogs before him but none had affected me this much. Maybe it was because I was the one who brought him home 7 years ago. It was my responsibility to give him a good life. 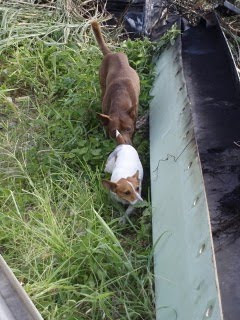 While he wasn't as privileged as Rusty, he lead a very happy life at the farm until he developed severe skin problems recently. When he moved into my apartment, he settled in quickly and found his favourite corner in the patio.

He was recovering nicely. He had a healthy appetite and was beginning to enjoy his daily walks. Suddenly, he started refusing food over the weekend. He didn't look like he was in any pain. His body felt a little warm but he was always warmer than Rusty, so I didn't think it was anything unusual.

Last night, I brought him out for his last walk, a short one. He wasn't very active. While he rested, I stroked his head and spoke to him softly. His eyes looked a little teary.

"Are you ok Cookie? We'll go to the vet first thing in the morning ok?"

I led him slowly to his bed and that was the last time I saw him alive.

When I brought him food at 7.30am this morning, I was happy to see him lying just outside our balcony door. I thought he was feeling better and had decided to crawl out of his cubby hole. But he didn't stir when I called out his name, I burst into sobs. My poor Cookie died while we were all asleep.

My neighbour Evelyn called me on the phone. "Is Cookie ok? He's not moving." It has become a habit for her to look out for Cookie from her balcony above.

I couldn't accept his death. He died under my care and I couldn't help feeling guilty. Was the chemical bath too toxic for him? Was he running a fever? I should have brought him to the hospital yesterday. Why didn't I see the signs earlier?

Last night I had borrowed Cookie's collar and leash to use on Bodhi. I was planning to buy a new set for Cookie today. It breaks my heart that this will never happen.

Then mum called to say Bodhi broke free from his leash this morning. He sprinted into the thick undergrowth by the reservoir and refused to come out. Two bad news in one morning! I had to deal with Cookie's stiff body first. The pet cremator was summoned over.

They were professional and efficient. While they were packing Cookie up, Rusty suddenly ran over and sniffed at his best friend for the last time. 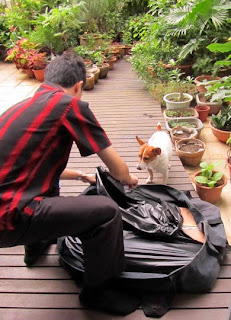 He looked so sad and was reluctant to see Cookie go. I had to carry Rusty in my arms to comfort him. 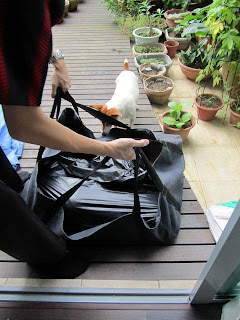 After they were gone, I knew there was someone else I had to call - Dr Bryan who treated Cookie just weeks before. He had a soft spot for Cookie. He was so shocked and sad to receive my call. After describing Cookie's symptoms to him, he suspected that Cookie could have died from pneumonia.

I had to ask if Cookie died a painful death. He said, "He could have had difficulty breathing right at the very end..."

Rest in Peace Cookie. May you continue to run free in doggie heaven. A place that is free from mites, ticks and illness. We will miss you forever. 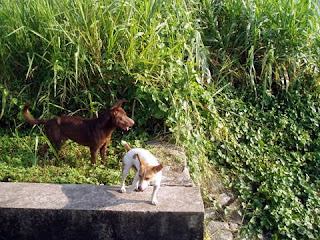 Don't be too sad. At least Cookie has been in the care of the loved ones.. He wouldn't want you to grieve too much for him.

Take care, he's over the rainbow bridge now happily with the others

Hey Ting, I can understand how you feel. My dog Max died when I opened the gate to bring him for a walk and he broke free of his leash.. only to be knocked down by a car. I felt so guilty because I was the one who opened that door... and sad because he died in my arms.

Sadly, things do happen that are beyond our control... Cookie has had a great life with people and dogs who loved him and whom he loved

Take care, I'm sure he is missing you where he is now but he is happy and healthy there.

I felt so sad reading this. I am sure he is in a good place. I know you miss him deeply though....

Oh Ting.... I'm speechless....
I thought he was recovering so nicely! Poor dog!

Anyway, now for sure he is happy in heaven above without any illness!
My family dog died of pneumonia too when i was 8yrs old.
Take care Ting!

Hang in there. Our deepest condolence.

Cheer up Ting!! Doggie heaven is a nice place full of doggie treats hanging off the trees and bones strewn along the pathways and buried under every tree... and squirrels to chase... plenty of doggie friends and no ear mites, no fleas, no ticks and most certainly NO sarcoptic/demodectic mange!!

Still... it took me a while to write out this comment because I was in shock for a while.

I feel your pain - my Joey died about 10 months ago, he was also down with pneumonia, I couldn't bear to watch him grasping for air in his final hours so had the vet to put him to sleep. RIP Cookie.

I know how that feels... Esp a pet whom u have taken care of from scratch.... Cookie will be free and happy in doggie paradise.

Oh this is sad. Nonetheless, he is in a much happier place now. Take care of yourself.

Pobell - I will try to envision him frolicking in the medows above :-)

OKC - It must have been so traumatic for you. You must have felt 10x worse than me. Sigh, why can't dogs live forever without illness or accidents.

JY - Yes, I can't help feeling emotional when I think of him.

Malar - He was recovering nicely. Sometimes life is just unpredictable.

Co&amp, ji - It was so nice to bump into you two + 2 wawas yesterday! Unfortunately I must have looked a mess :-P

The little poem makes me smile :-)

Petunia - Thanks. Cookie can have all the treats he wants in Doggie heaven. :-)

CKL - I never could understand the pain dog owners feel when their pets pass away but now I do. I am so sorry to hear about your dog. It is too heatbreaking to see our pets suffer.

Anon - Thanks. It's comforting to know that he had a good life. :-)

MH - Yes. He's in doggie heaven with Spooky, Jack, Russell, Charcoal and all his doggie friends.