Best friend called to deliver the bad news yesterday. They can't take in another dog. Their hands are quite full with two big dogs they had adopted from SPCA over the years. I can't say I'm not disappointed but I have no more time to waste.

Operation Bodhi kicked in right away. After a flurry of phone calls, our neighbours agreed to capture him and send him to my parent's farm today. We met at the usual place at 6pm. Evelyn was tasked to give Bodhi an early dinner while Vikki waited in his car with collar and leash.

The old couple with 2 Golden retrievers also wanted to be a part of the action. They rushed home to bring us a huge bag of premium dog food. Everyone loves Bodhi so much! 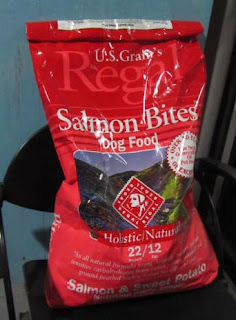 Bodhi seemed more alert and wary than usual. It took us a while to coax him near Vikki's car. Finally, Vikki shoved him in gently. That was when Evelyn started to cry. This time Bodhi was leaving for good, she just couldn't bear to see her 'baby' go.

Of course she's always welcome to go visit Bodhi at the farm but really, it's not just a hop and a skip away. With Vikki following behind my car, the 35-minute drive seemed like forever today.

Bodhi was so nervous when we reached the farm, he refused to get out of the car. Little by little, Vikki managed to move him to the front porch. He'll stay leashed up for a couple of days as it is too easy for him to escape at the farm. We need to familiarise him with his new home first.

He's used to sleeping out in the open field, under the stars. It was no surprise that he settled in on my parent's vegetable patch instead of the tiled porch. Within 30 minutes, the entire patch of basil, wild ginseng and Indian borage was totally flattened by the big doggie.

My parents are so magnanimous, they didn't mind one bit. Mum simply shrugged it off, saying that she can grow another patch elsewhere. Dad tried to feed him dinner despite being told that Bodhi had already been fed earlier. I guess it is just his way of welcoming our new pet. 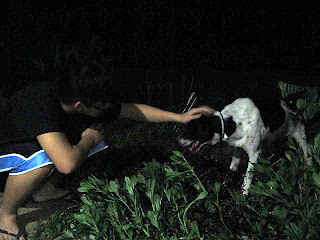 SK spent an entire evening outside, keeping Bodhi company. Bodhi kept his distance at first but was soon won over by SK's love for dogs.

By the end of the evening, Bodhi was no longer nervous. Before we left, he was already playing happily with Harry. I couldn't help but call up Evelyn and Vikki to share the good news. 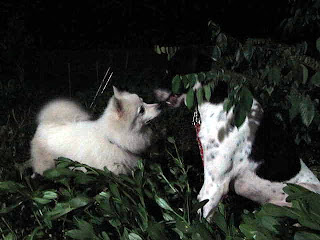 Harry and Bodhi - so happy together!
Posted by Blur Ting at 06:59