Of dogs and mouse noodles

Cookie seems to be settling in very well. Ever since he set foot into our house, he hasn't even made a squeak, let alone bark. He's just happy to be amongst Rusty and people who love him.

We (including Rusty) went out for a BBQ party last night and left Cookie all alone at home. I was surprised to find him sleeping soundly at his favourite corner when we returned. There were no signs of anxiety at all.

At the farm, he loves sleeping under my dad's car. I think he likes tight places, so I'm not surprised that he has made the little corner of my patio, under the big umbrella, his home. He has to squeeze between the chairs and flower pots to get in but he's happy there. For once, I am glad my garden is shady.

When I take him out for walks, people tend to give us a wide berth and a curious look. It's like, what's she doing with a balding dog? I know Cookie's not the most elegant looking pooch in the neighbourhood but he has a great personality. Besides, his fur will grow back soon, though his ears will never be perky and normal like before. They're just a crumbled mess after the surgery but my kids love him so much and are constantly gushing at how adorable he is. They think he's cuter and sweeter than Rusty, it's almost comical.

Cookie still tries to sneak into the house every now and then. I let him into the kitchen sometimes, just to be fair to both dogs. When I was cooking mouse noodles this morning, both dogs were sitting below the stove, drooling.

In case you're wondering what kind of rodent I was cooking, it's a rice noodle called low si fun (mouse noodle) because the noodles are shaped liked a rat's tail. I cooked the noodles with lots of mushroom, bean sprouts and leafy greens. There's not even a single rat's tail in there. 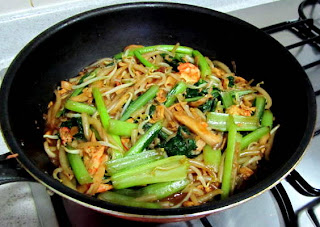 That wok must be the luckiest thing in the world. It tastes everything you cook!!

LOL, luckier than me cos I don't even taste or eat what I've cooked!

I like both dogs... they're both adorable...and mouse noodle... looks GOOD to me!

Cookie's looks: u r very kind but I guess beauty is in the eyes of the beholder!

I love mouse noodles too!!

That dish looks SO SO SO delicious!!! Yum...glad to hear Cookie's doing great there! :-D

I like mouse noodles too! You personify the phrase "Mothers cook best"!