Once again, we decided to go off the beaten path… up north to Darwin, where you can find the largest proportional population of indigenous Australians of any Australian capital city. Just over 100,000 people live in Darwin making it one of the least populated cities in the Australian continent.

Saltwater crocodiles are so common here, more than 80,000 of them roam the waterways of Northern Australia, sometimes on the beaches. Yet you rarely ever see them. They bask in the sun during the cooler months but when it's warm, they bury themselves in the mud, under the trees in the shade.

Well, we'll have to find a way to see them, don't we? It’s too dangerous to go looking on our own, so we joined a Jumping Crocodile Cruise where the local guides entice them to leap out of the water! 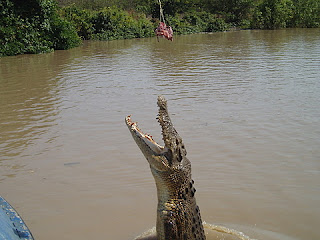 The crocodiles know these boats, they leave their place of hiding, knowing they may be fed. 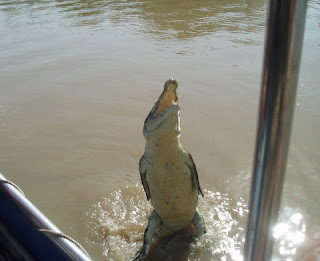 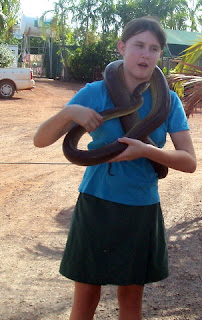 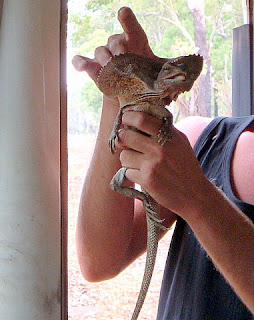 Our indigenous Australian guide suddenly leapt out of the bus, returning with a frilled lizard. He started passing it around and I was just freaking out!
Posted by Blur Ting at 04:04

Crocs - one of the few animals that I can muster no affection or care for.... I'm scared of them and find them awful :(

To be honest, I fear and dislike amphibians and reptiles. But there's hardly anything else to do in Darwin, really....except for the nice flea markets.

cheap beats pro
I constantly spent my half an hour to read this blog's articles daily
along with a cup of coffee.

Hi there just wanted to give you a quick heads up.
The text in your content seem to be running off the screen in Firefox.
I'm not sure if this is a formatting issue or something to
do with web browser compatibility but I figured I'd post to let you know.
The style and design look great though! Hope you get the problem solved soon. Thanks

My web-site; how to lose weight

Hurrah, that's what I was exploring for, what a information! existing
here at this web site, thanks admin of this web site.


Have a look at my website; tantric Massage (http://mike.kallies.ca/wiki/doku.php?Id=feel_incredible_with_these_great_massage_tips)