I arrived in Bangkok late Sunday afternoon after some delay at the immigration when the computer system decided to freeze up. This happens alot these days at the airports. When the system's down, everything comes to a standstill. Makes me wonder if people can do anything manually again anymore.

This time, I stayed at the shopping district of PloenChit, flanked on all sides by luxury shopping malls. The last time I was in Bangkok (2 years ago), we stayed one night in Khao San while en-route to Korat for our adventure holiday.

If you ask me to make a comparison, they're like two different worlds. While Khao San is a backpacker’s haunt, teeming with old buildings and temples, ethnic restaurants and tattoo parlours, PloenChit Road is a shopping haven for sophisticated shoppers where Prada, Gucci and Armani compete for their attention. Of course I didn’t get distracted. It’s a business trip after all.

I must say I’m really impressed with the country’s progress. The nation is definitely in a celebratory mood. As the host country of the 24th Southeast Asian Games, they're the biggest winner, hauling in 183 gold medals. More importantly, they're celebrating their revered King’s 80th birthday. It’s heartwarming to see that the king is very well-loved by his countrymen. On the Monday I was there, almost everyone wore the royal colour of yellow as a sign of respect for their king. 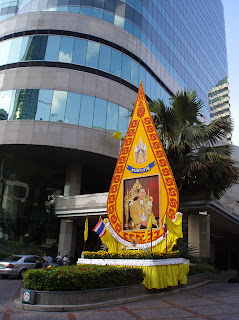 Outside our hotel - a tribute to King Bhumibol. 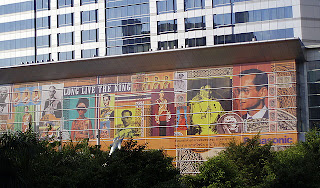 King Bhumibol's birthday on 5 Dec is a national holiday in Thailand and has increasingly become a day of nationwide tribute to the man who is the most influential figure in modern Thai history. In his six decades on the throne, he took an active role in rural development and is respected for his dedication to helping the country's poor. 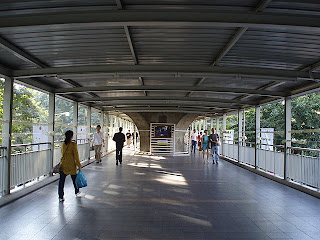 The sky walk is a cool elevated pedestrian walkway that links all the major shopping malls. From the skywalk, I could observe the busy traffic below without having to worry about getting run down. 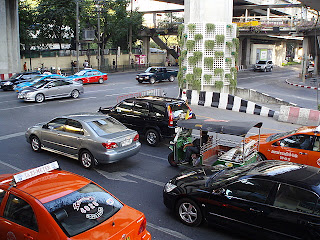 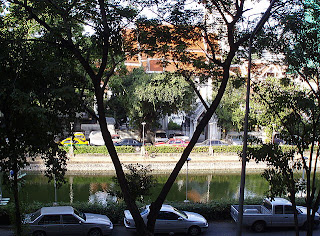 I spotted a Buddhist temple sheltered by shady trees. 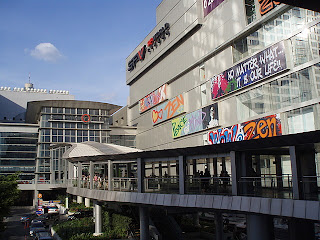 The Central World is the biggest shopping mall in Thailand. All the main brands are represented here and it would take more than a day just to explore its 500 world class stores and 50 restaurants. The building is huge, measuring some 400m long and including an attached hotel, 55 floors high. 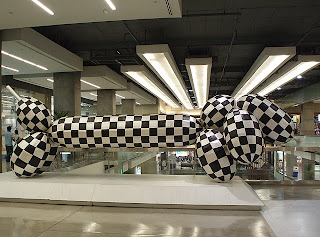 Interesting and humongous piece of art inside the Central World. 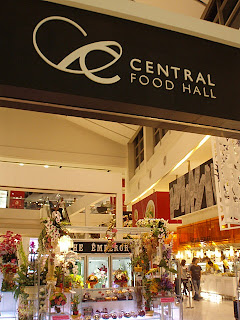 One of my favourite zones in Central World is the Food Hall where I had dinner one night. 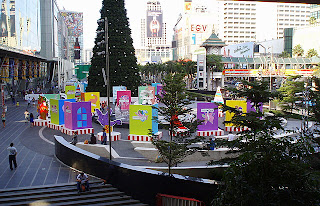 Here's a view of Central World from the sky walk. 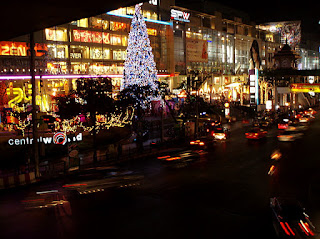 The same view at night. 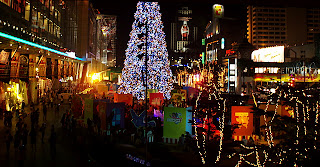 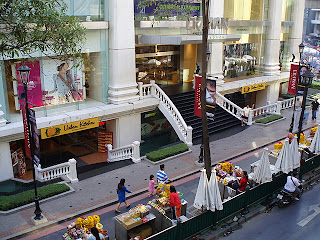 Flower vendors lining the street outside Grand Hyatt Erawan, one of the best hotels in Bangkok. My business associate treated me to a wonderful lunch of Thai curry, Tom Yum soup, other traditional dishes and dessert. 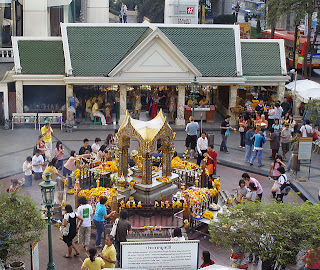 The famous Erawan Shrine that belongs to the Grand Hyatt Erawan. The shrine was built to appease the spirits after a series of construction accidents occurred when the hotel was being built. Traditional Thai dances can be seen there during the day. 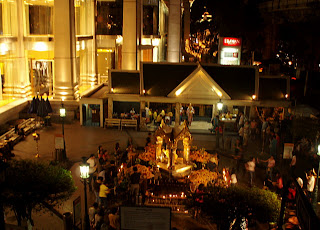 There's a constant flow of devotees day and night. It was packed the night I walked by. 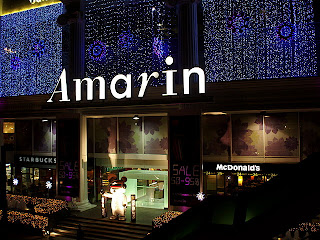 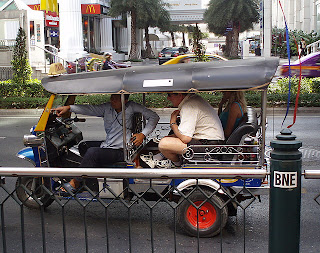 The tuk tuk is a widely used form of urban transport in Bangkok.
Posted by Blur Ting at 02:00

Tuk tuk reminds me of bajaj in Jakarta he he he...

It seems to me that Indonesia's WAY WAY WAY far behind Thailand!!! Tsk tsk tsk...

Hi! Great pictures! Bangkok looks so exotic to me! The picture of the Tuk tuk reminded me of my time in Petén, Guatemala. They also use them a lot there :)

Hello, for all time i used to check weblog posts here in the
early hours in the morning, because i love to find out more and
more.

Very nice article, exactly what I wanted to find.

My web-site - self storage in Thousand Oaks

What's up to every one, the contents existing at this web site are genuinely amazing for people knowledge, well,
keep up the nice work fellows.