I was at a familiar place this morning to buy something from the store. It brought back some memories. The year was 1991, I had just gotten married and moved in to live with his family in a small flat. From a carefree girl who was so used to the vast countryside, sharing a 700 sq ft apartment with 6 other adults was a brand new experience.

We lived on the 12th floor. That took alot of getting used to. Looking down from above always made my knees go weak. It was then I discovered I had a fear of heights.

I felt like a stranger living in someone else's home. No matter where I turned, I kept bumping into his family members or the furniture and four walls. The sound of traffic below and frequent Buddhist wakes (funeral customs and ceremonies) kept me awake on most nights. At the break of dawn, the deafening chirps of the numerous birds his brother kept in cages around the house greeted us or shall I say, jolted me out of bed. For once in my life, I felt like I was living in a cage.

Soon, I got pregnant with YK. With a growing girth, the little apartment became even more claustrophobic. There were only two small bedrooms. His brothers and an uncle slept on thin mattresess laid on the living room floor. I found it awkward to manoeuvre around them on my frequent nocturnal trips to the toilet.

When we brought YK home from the hospital after birth, his cries would fill the entire house. It was the hottest time of the year and the room was warm and stuffy. According to Chinese tradition, I wasn't allowed to shower after birth lest I caught a cold. His mother monitored me like a hawk each time I walked towards the bathroom. She meant well but I was hot, itchy and frustrated. Yet I complied to make peace. Four months went by very painfully until we finally moved out into our own apartment.

Then another 10 more years before I finally moved out of his life. 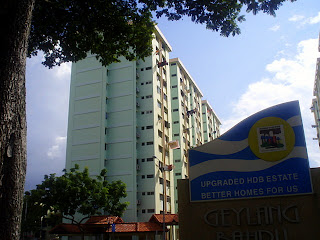 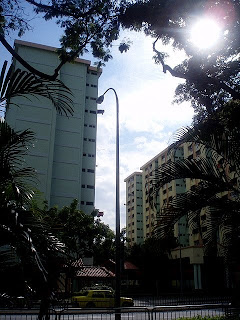 We lived in the block on the right. His mum sold the flat years ago. 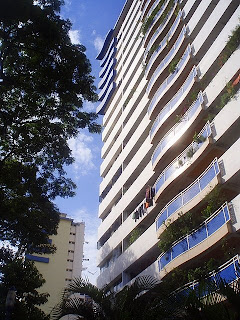 Some new features were added to the facade during the recent upgrading. 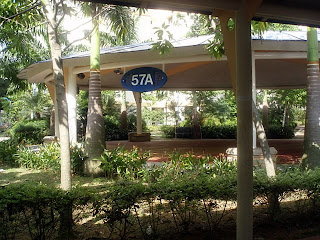 They have a pavilion for functions and al fresco weddings now! 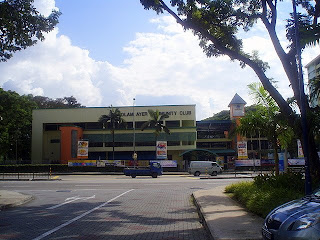 The community club looks the same then and now. I had never ventured inside to check out the sports facilities or yoga or aerobics classes.
Posted by Blur Ting at 19:09

Wow .. You had to stay with so many people when you first married him? I can really understand how you must have felt then!

When I first married my husband, before my in-laws and us moved into our respective new flats, I stayed with them in a four-room apartment in Serangoon. They were the most understanding and easy going in-laws that anyone could have asked for. But even then, I was really very uncomfortable and felt really lack of personal space.

It's good to look back once in a while. Good or bad memories alike, serve as important lessons for growth in life.

Have a Great Weekend!

It's funny how sometimes we look back and knew that things were not quite right from the beginning yet we hung on... glad that you have a better life now. It's hard to live life with no regrets; we try, we learn and we grow.

Water - I came from a very peaceful and quiet family and I was so not used to their cussing and different lifestyle. It was very very shocking for me actually. The 1-month maternity leave was the worst. I wanted to scream! The feeling of being watched constantly and nagged at was unbearable, especially in a small enclosed space.

CKL - Yes, you're right. Wisdom really comes with age as I slowly discover. I was young and rebellious. :-)

I stayed with a huge family when I was young but thankfully, I had my own place when I got married.

It's good to have memories, and once in a while, even though they're good, bad or horrible memories, it's good to look back on them. It makes all that we do now seem worthwhile :D

Nick - I think staying and growing up with your own big family is fine but to suddenly fit into one feels really awkward.

I don't really look back on unpleasant memories or even remember them very much. Those village memories I like :-)

Oh dear...so the Chinese tradition is still the same as in Indo. Most women who have traditional parents would also do that: not showering for months. Uuuuhhhh...

I can't believe you stayed with so many people back then in one place. I agree with Karen, though...it's always nicer to have your own place no matter small it is: for privacy and freedom.

My Mom's trying hard not to be involved in my brother's life and his wife's. He wants to make sure that they feel at home living together with them in the same house. :-)))) I'm GLAD they get along REALLY well.

I expect you can't believe how different your life was then.

I agree with water learner - good or bad memories serve as important lessons for growth in life.