It's one of those evenings where I had to rustle something up in the kitchen because of lack of planning. By the time I got home, it was too late to thaw fish or chicken, so I made do with whatever I could lay my hands on.

This dish consists of some kind of gourd, Inoki mushrooms and black fungus. It turned out to be everyone's favourite dish. 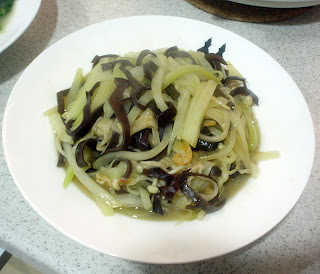 For protein, I cooked luncheon meat mixed with chopped potato, tomato and mixed vegetables. I rarely cook luncheon meat at home because I don't want to feed my kids too much processed meat. I was pretty surprised that this canned meat wasn't as salty as it used to be. A friend once told me that he grew up eating this on a daily basis. I thought he was going to die of a heart attack! I'm sure this is a comfort food amongst many people living here. 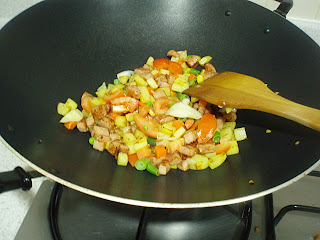 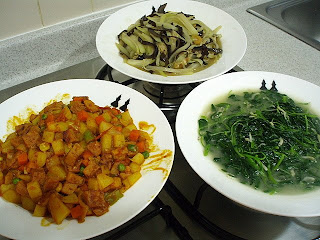 Here are some of the cooked dishes. 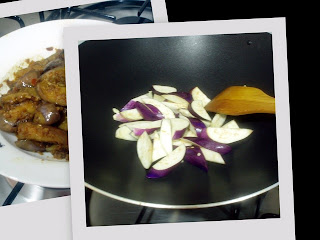 Mum gave me a brinjal (eggplant) on Sunday because she knows it's one of YK's favourite food. I cooked it with a kind of prepacked chilli paste and it turned out rather awful. Half the plate ended up in the bin.
Posted by Blur Ting at 04:11

Oh dear, food in the bin? Can't have been very nice at all! I expect everything else was though!

I refused to eat eggplant until I was in my late teens! (Army food)

World - The eggplant was not so nice. The kids thought it tasted weird. Must be the paste. The other dishes were ok...

CH- So you can't be choosy in the army right?

Wow, you certainly can fire up many good dishes even without much time. That's amazing.