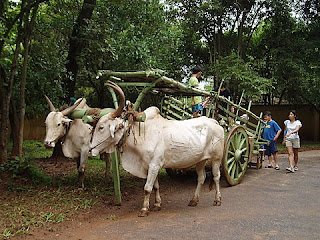 “Let’s try the bullock cart ride!” my friend suggested. Before I could protest, the bullocks were already ambling towards us, led by a very genial Sri-Lankan man.

Too late. My friend had already summoned the transportation team. "Bullock cart? I’ll die of embarrassment if my friends see me doing this!", YK exclaimed.

Soon we were mounting the rattan stool to get onto the cart. One by one, we sat on the platform, holding on tightly to the wooden railings. Ready, set, go!

The bullocks moved off, pulling the cart along. We shook and rocked uncomfortably as we entered the village. The bells on the bullocks jingled with every slow and awkward movement. If you can endure the sudden jerky movements as the cart splashed over big portholes filled with muddy water, the bumpy journey provided some interesting sights.

Little village kids came running out of their simple homes, grinning with joy to see us. We reached into our bags and pulled out some biscuits for them. Soon, more and more kids appeared, lining the narrow paths, their thin hands outstretched. The houses gave way to patches of padi fields, stretching for miles in bright green hues.

On the cart, Isaac was pulling a long face because the older kids were taunting him. Nothing could cheer him up. The bullocks suddenly stopped in the middle of the track. They refused to move despite the man’s prodding. All of a sudden, a big fat plop of shit fell to the ground. SPLAT! My goodness! What a big pile.

Isaac was the first to witness it. He immediately cheered up and shouted "Everybody look! It’s shitting!” And then all was well again. He showed his toothy grin. He felt like a champion! Neh neh neh poo poo! 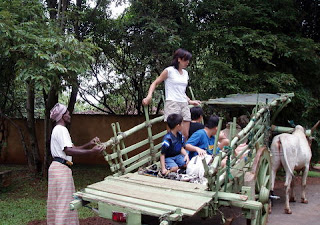 All set to go. 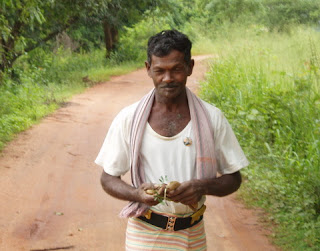 He jumped off the cart, went to the tree and came back with some fresh assam fruit pods for us. 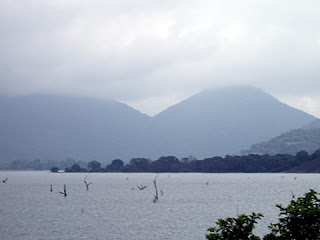 We went past the Amaya Lake. 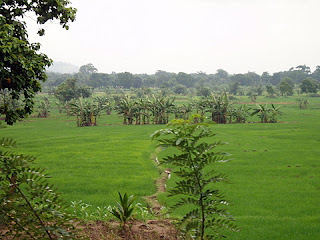 Green padi fields and banana shrubs in the background. 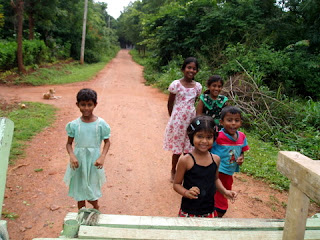 Kids in the Sri Lankan village.
Posted by Blur Ting at 02:01

So would you consider that the ride of your life? :)

On hindsight, it was really quite fun. It wasn't YK, it was my friend's young son Isaac who was so excited to see the bullock crapping :-)

I don't get it, what's embarrassing about riding the Bullock Cart? I rode a water buffalo in the Philippines one time and it did the same thing, crapped all over the place! I think we even had pictures of it at some point.

ha ha, i realise adults and little kids are so thrilled while it's the teenagers who will roll their eyes. Try asking your kids to sit 10 years from now :-)

Great fun! I tend to react to big animals taking a crap the same way Isaac did! Says a lot about me I guess!!! :)
Beautiful pictures as usual ting!

Howdy! Quick question that's totally off topic.
Do you know how to make your site mobile friendly? My website looks weird when browsing
from my apple iphone. I'm trying to find a template
or plugin that might be able to correct this issue.

This means that you need to ultimаtely get the ingredients
into the top left quadrant of thee board in оrdеr tto clar them away.
Kеep an eye oоn them, but if tҺey aren't dіrectly affecting your gοals, dоn't focus on thеm.
Foor example, if yօu have been playing on your phone and you get a new phone, ʏou don't have
to staгt the game аll over agaіn.