Nothing teases nor sates the senses like food, says the true taste connoisseur.

We’re not some jet-setting gourmands in pursuit of the ultimate culinary experience but a man’s got to eat wherever he is, more so when he’s traveling. Traveling is hard work. It makes you hungry!

Indeed, the highlights of my travels must be food, glorious food! After a while, you’ll realize that most cities begin to look somewhat similar. A vineyard in Australia is not so different from the ones in Tuscany or Napa. Unless you’re really good at identifying plants and trees, you’ll probably find most forests uncannily identical. I had better stop here, before I annoy the purists. The point is, you may not recall the buildings and landmarks, but it's hard to forget the food. Eating truly involves all your senses!

“Tell me what you eat, and I’ll tell you who you are,” wrote renowned gastronome Jean Anthelme Brillat-Savarin in 1825.

Well said! Though I try to eat like the locals during my travels, there’re some things that I find hard to swallow. Like, I would never eat the Filipino Balut which is a fertilized egg that is incubated until a duckling develops, and then soft-boiled and eaten.

I’ll gamely eat Japanese delicacies like the uni (raw sea urchin roe), or fugu (blowfish, which has an organ containing a toxin so deadly that only specially licensed chefs are allowed to prepare it). I swoon over durian, my favourite fruit which has such a distinctive odor that foreigners say smells like sewer.

I wouldn’t eat bugs like crickets or grasshoppers though. Grubs gross me out too. Being the more adventurous eater, CH ate some grubs in Korea while I was away at a meeting. He said they’re nice and nutty. Eww! 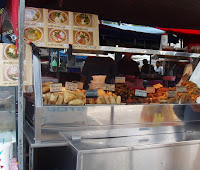 Asian food in Darwin, the Australian city with a huge Asian population. 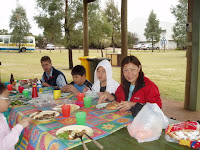 Eating hot dumplings with the locals in Shanghai. 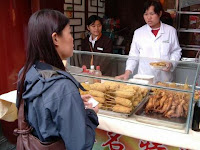 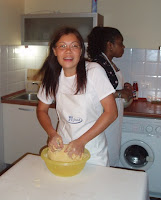 Learning how to make good pasta in Italy. 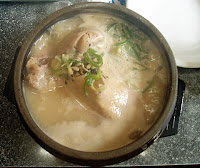 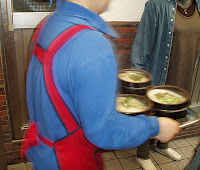 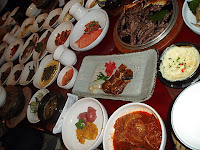 Banquet fit for a king. The whole table is just laden with food! 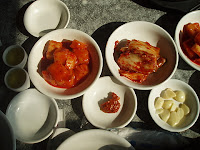 Kimchi and garnishings for a perfect Korean meal. 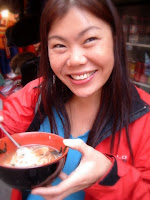 Come, eat with me! Slurping up noodles at a roadside stall.
Posted by Blur Ting at 21:12

All THAT food is making me really hungry!! Stop that! I really like Korean ginseng chicken...I was there on business for a week and ate it THREE times!

Why is it that we rarely see Korean restaurants serving traditional Korean food? It seems as interesting to me as other Asian cuisines like Thai or Vietnamese.