Invasion of the macaques 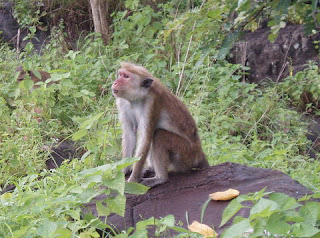 When I was running near the nature reserve this afternoon, I was surprised to see macaques everywhere in a school compound. Mothers and their tiny babies were sitting on the stairways, groups of them were in the playground, some were walking on top of the fence...they have invaded the school during the weekend.

It reminds me of a book called Murky Woods that I used to read to the kids when they were little. These monsters invade the school at night when the kids have gone home for the day. 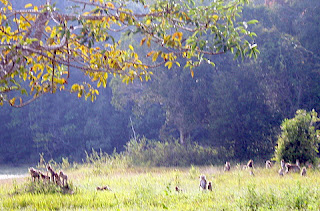 Macaques are common here and the population is growing because they have no predator. They are not afraid of human beings and instead of foraging in the forest, they are often found at the forest edge close to human habitats. 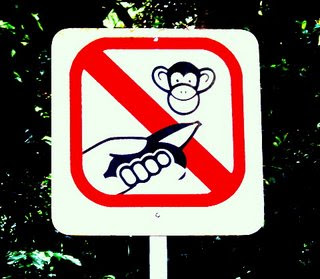 It is now an offence to feed them (a fine of S$250) because they become very aggressive and would harrass people or raid houses near the parks. A macaque stole my wallet while I was at the park early this year. It was a funny moment. Read the full story here.
Posted by Blur Ting at 01:14

I can imagine a macaque saying "Give me a bite to eat, I won't say anything."

He's thinking.."I'll bite your hand if you don't feed me!"

yeah those little critters are smart...Japan has those similar monkeys...they get into the hot springs with ya...eeewww..don't know if I'd wanna monkey sharing my bath!

Eww! They have ticks you know!

They are really vicious at times - it's scary