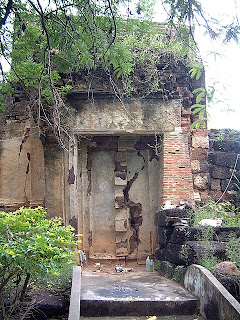 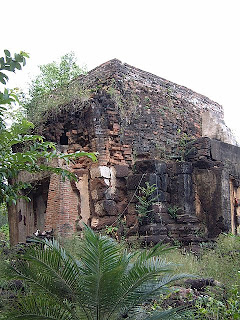 After Jimmy brought us to Phimai which is the most important Khmer temple within Thailand, he knew we would be intrigued to see the small Khmer temple site near his homestay in Isan.
The north-eastern region of Thailand or Isan is isolated from the rest of the country by the mountains on the south and west. The inhabitants of the area are culturally closer to Laotians as the region was originally part of the Khmer empire until the Thais captured it in the 12th century. Isan is noted for monks who, in the Thai forest tradition, retreat deep into the jungle, mountains and caves to pursue meditation and enlightenment.
If not for Jimmy, we would never have discovered it on our own. Tucked away in a remote and quiet site, it contains an ancient Khmer monument as well as a big pond that’s full of catfish. There is no tourism here which makes visiting a real pleasure.
After strolling around the temple grounds, Jimmy suggested we should feed the catfish. Catfish? We didn’t see any catfish swimming in the murky pond at first but after throwing in some food, the feeding frenzy began! 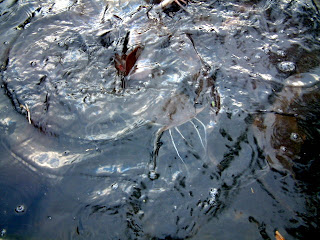 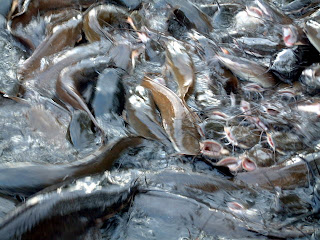 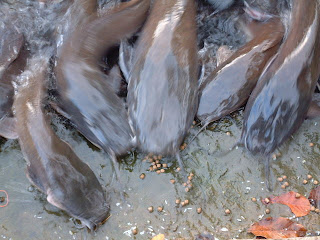 Even crawling out of water... 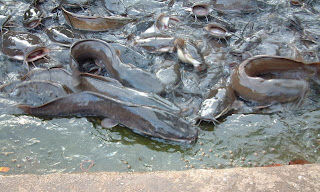 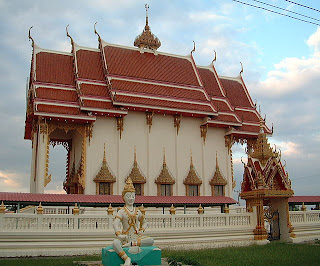 A beautiful, modern Thai temple next door.
Posted by Blur Ting at 19:28

Yup, they were so hungry! Cos I think nobody goes there you know. It's a real remote place. Bangkok is great for shopping! and food!

I'll be in Thailand for three weeks in November and I'm really looking forward to it...any hints on what I shouldn't miss?

Hey Loz, it really depends on what you like. There are lots of beautiful beaches in Thailand. We had wanted to go to Hua Hin, it's a place where the king goes for his vacation but we decided to rough it out the last time. It has nice villas that are luxurious.

Most of the other beach places are very touristy like Pattaya, Phuket and Koh Samui. Some of the smaller islands have secluded villas too. Chang mai upnorth is cooler while Bangkok is full excitement. There's something for everyone in Thailand.

I love Chang Mia - it was magical. I preferred it to Phuket which was so crowded but Koh Samui and Koh Phangan were awesome.

Yah, Koh Phangan is more secluded but heats up during the full moon parties! However, the seas will be really rough during the monsoon season and they sometimes suspend boat service. That means you could be stuck on this island for days....which can be nice if you have lots of time to spare.

Hello there, I found your website by way of Google even as searching for a comparable matter, your website came up,
it seems to be good. I've bookmarked it in my google bookmarks.


Hi there, just turned into alert to your weblog through Google, and found that
it is truly informative. I'm gonna watch out for brussels.

I will appreciate for those who continue this in future. Lots of other
people shall be benefited out of your writing. Cheers!