Once again, the motley crew came together last night to throw a party for Patricia. Lately, the birthday girl has been reminsicing about her summer camps in Germany where they toasted bread over a bon-fire, her indulgent friends decided to go the whole hog and throw a German BBQ party.

Patricia got all excited and went hunting for sticks early in the morning. She arrived in the evening, armed with a bunch of 1-metre long sticks and leavened dough for the bread. The rest came trickling in soonafter, bringing beer and champagne to contribute to the stash. 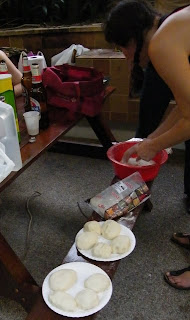 Soon, everyone was standing before the fire, holding a stick with dough wrapped around one end. 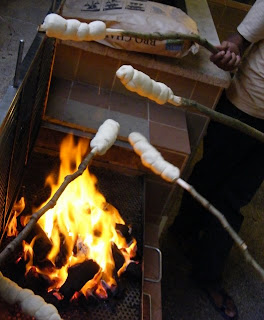 After 15 minutes, the bread was ready for eating. It tasted like a denser version of the French baguette. 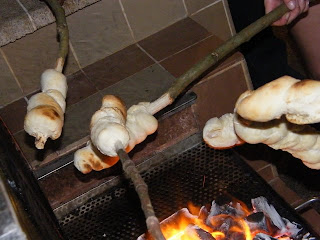 In line with the German theme, we had pretzels, frankfurters and hamburgers garnished with German gherkin. 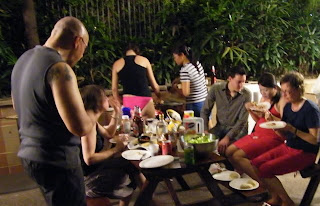 The BBQ ended up at 10pm but the merry making continued at my patio until the wee hours of the morning. I woke up to lots of leftover food today, so I had donuts for breakfast. For lunch, I made a pasta meal using grilled chicken, cherry tomato and fresh button mushroom from last night. 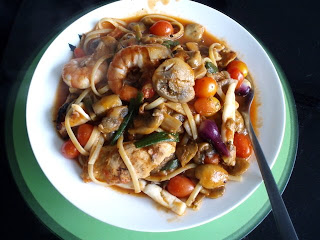 Sounds fun. I bet a more airy dough, like a pizza dough, will taste great over fire.

Woa...those were definitely fresh from the 'fire'. Have not seen that for quite a while. It's a luxury, esp in a small city like ours!

I want the Marshmallows! *Drools*