It has been a busy weekend, hence the lack of posts. CH and I decided to drop by Joan Bowen Culinary Centre for lunch on Friday and we left very impressed with the food and service. I stumbled upon the cafe in July and had blogged about it.

The good news is, it is up and running now. Business is good and the kitchen staff are coping very well. We had rosemary chicken, baked mussells and the oreo cheesecake. The rates are reasonable and the food was really delicious, even more so than many established restaurants that we had been to.

After lunch, we dropped by a health equipment store to buy myself an exercise bike. Because of the limited space in my apartment, I wanted a really compact one. When I saw this little fella in the papers, I went down and bought it immediately. The bike is now sitting in my living room.

It has pedals without a seat. I have placed it in front of my sofa so I can pedal while watching TV. It's so portable too, I can even lug it to my office and pedal while working at my desk. Now I have no excuse for not exercising. 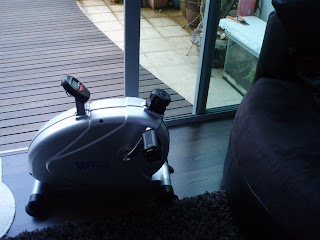 I was at the range to support CH at the archery competition this morning. The weather was cool and pleasant until dark clouds moved in. 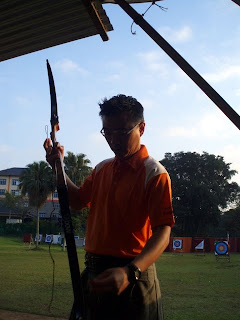 Setting up his equipment. 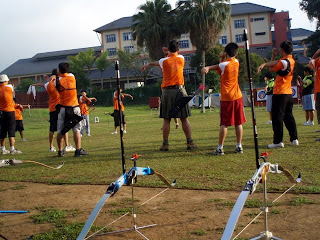 Then it rained the entire morning, the competition was almost called off. The enthusiastic archers didn't let the rain dampen their spirits and decided to forge ahead. 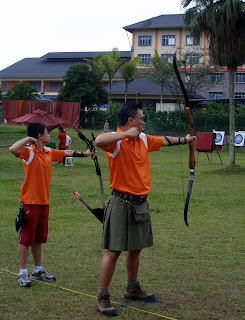 Their persistence paid off and CH came in third in his category! 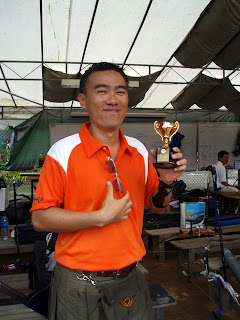 Looks like a funfilled weekend! My husband is a fan of archery, too. In fact he has his own bow and arrow set that he bought when he studied in US. Where does CH practise usually? Maybe my hubs would be interested.

Have a great week ahead! For me, it's going to be a very busy week.

I was competing against kids and teens! The club is called flaming arrows, located at Teck Whye Secondary School.