While traveling to European cities isn't exactly cheap, to me, the experience is worth every penny. With proper planning, it's more affordable than you think. Instead of spending on expensive handbags and shoes, I would rather use the money to satisfy my wanderlust.
Even while traveling, there are ways to stretch the dollar. I don't travel on business class because to me, the priority is being there, instead of getting there. However, I've learned not to fly on the cheapest tickets because more often than not, your schedule gets messed up.

I like the freedom of traveling on our own, sans tour guide and groups. With the wealth of information available on the internet, we've had no trouble getting about on public buses or trains. It is part and parcel of the traveling experience. Though I must say, we had a bad experience in Lourmarin where we missed the only bus to Marseille.

We watched helplessly as the bus roared past us because we were waiting on the wrong side of the road! We finally hailed a cab with an inexperienced driver who spoke no English and got lost in Marseille. We ended with a 100 Euros fare and a headache!

We travelled independently on our biking trip. We signed up with a biking company that provided maps, directions and bike. We set off early each morning and would arrive at the hotel in the next town to find our backpacks already waiting in the room. Some of the hotels provided were quite posh, like this newly refurbished one in Lourmarin. The decor was very zen and contemporary. I can't remember the name but can still recall the artistic touches and attention to details. 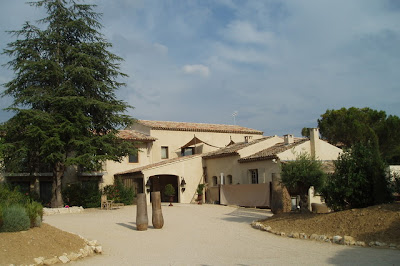 Unlike the other Provencal villages perched on a hilltop, Lourmarin lies on a plain. The downhill ride to the village was quite thrilling, at times very frightening as we wound through cliffs and forest, with a few hairpin bends thrown in.

The French motorists are very tolerant and always treat cyclists with respect. I had never felt any pressure even when I was slow on some days. 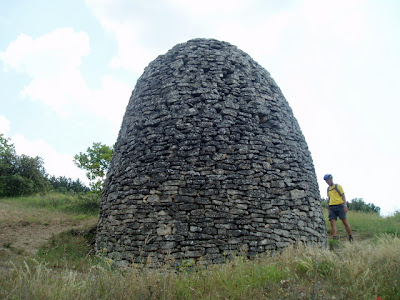 We came across these curious looking things along the way.

Lourmarin is extremely picturesque, with Catholic and Protestant churches and a pretty Renaissance castle that overlooks meadows and terraced gardens.

Due to the numerous cafe terraces, restaurants and boutiques, Lourmarin attracts many visitors during the day. By the time we arrived that evening, it was rather peaceful. Upon entering the village square, we noticed the typical Mediterranean architecture in its winding narrow streets, mostly too narrow for cars to enter. 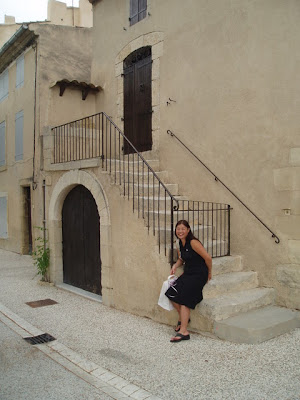 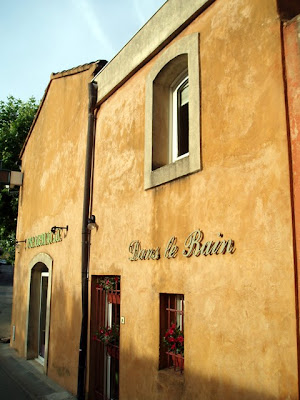 The town has a reputation for attracting artists - it's most famous inhabitant was Albert Camus who lived here and is buried in the Lourmarin cemetery. Maybe that explains the profusion of art galleries and shops. 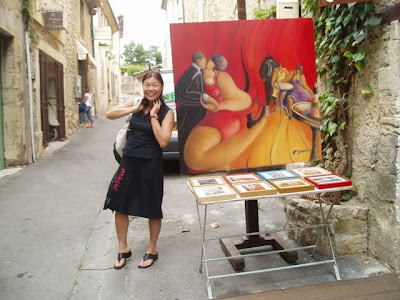 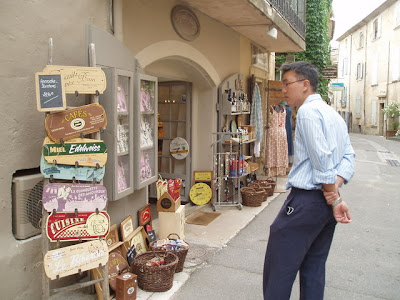 Traveling on our own means that we can eat like the locals. Sometimes if we're lucky, we end up in a good restaurant listed in the Michelin Guide. While roaming about, we stumbled upon a restaurant with an imposing door and an adorable dog outside. 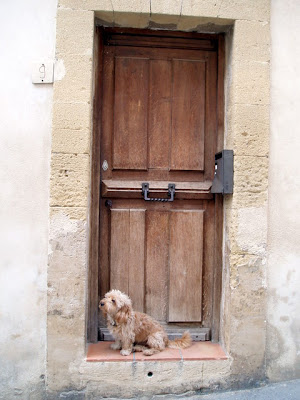 While cuddling it, we decided it must be a sign that we should stop for dinner in that restaurant. The big wooden door opened to a restaurant filled with diners. We were lucky to secure a place at the roof garden even though we didn't make any reservations.

It was one of the best meals we had in Provence. The foie gras was cooked to perfection and desserts, especially the creme brulee, were heavenly. I would have kissed the dog but we didn't see it after dinner. It must have gone to bed. 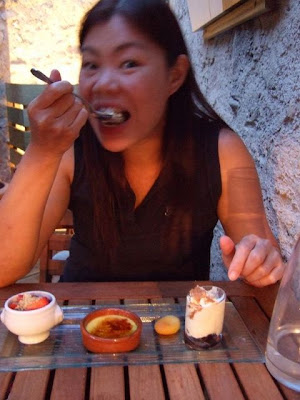 Good times shld be immortalised in a separate blog (and perhaps into a travel guide) where pple needing tips and impressions cld go to and drink deep of your experience.. (?)

also some links and contacts (if available) wld be helpful..

Have a great Sunday!

Auntie Lucia - Thanks for the suggestion. It's probably too much work (and too little travel stories) to maintain another blog at this moment. I'll write as I go along and perhaps migrate them all into a separate blog later on.

Amazing! This blog looks exactly like my old one! It's on a
entirely different topic but it has pretty much the same page layout and design. Superb choice of colors!