A brief half marathon report by CH

This is an article posted by CH on the runner's forum. I've reproduced it here for your reading pleasure.

BT (Blur Ting) and I arrived on Thursday and spent 2 days in a mountain resort. The chilly evening and morning temperatures had us worried about what kind of running condition we'd have to deal with. On Saturday we had dinner with friends who had arrived separately and had collected the race packs on our behalf. According to them this took a good part of their afternoon.

Upon inspecting the race tags, I found that BT and I had different start times. On closer checking she found that she had been mistakenly registered as 10k even though her form stated half marathon. The friends checked their own race tags and found that another one of them had also been put in the wrong race category. They decided then they would run with whatever category they had been dealt. The neighbouring 7-11s were also seeing a brisk sale of safety pins that night, as none were included with the number tags.

After a quick breakfast of red bean bun and some Thai isotonic drink (can't find100Plus or Gatorade at 7-11), I went to the lobby to wait for the other 2 friends who were doing the half marathon. Sure enough the 2 ladies came jogging down the road. We attracted some attention passing a neighbouring bar. Some intoxicated farang stared at us as if he could not believe people were going running at 430 in the morning.

Thapae gate was just 5min jog from my hotel. Upon arriving we made some enquiry at registration we found that no refund was possible, but they could redo the tag for the mis-registered runners. After some frantic SMS, BT joined us at the assembly area. The other friend had decided to stick to the 10k. Thapae gate square was festooned with yellow lanterns and the stage was decorated with a backdrop of the King. We found out later that the area was also the site of a weekend market. 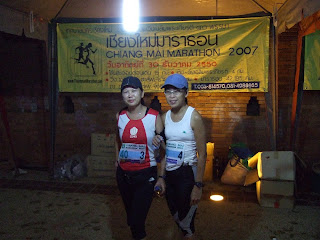 Rosemary and Bai Yun before the race. 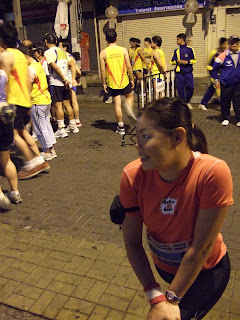 BT warming up before the run.
.
After some ding-dong we proceeded to the start line. Instead of a starter pistol or air horn, we were seen off with a firework! The blast lit up the dark dawn sky and sent us on our way.
The Run
The first few kilometers had us running past bars that were closing and restaurants that were opening. Some bar girls and lady boys even waved at the passing runners. While the air was cold and refreshing, you couldn't escape the smell of the canal. As the run progressed cars, tuk-tuks and motorcycles added their exhaust fumes to the olfactory riot. It was only after we turned out of the city onto the highway that we got some reprieve from the assault on our noses.
.
Water points were well spaced and adequate, manned by race officials assisted by young boys in track suits. No isotonic drinks though, just cups filled to the brim with cold water, most of which ended up on the road.
.
As I neared the 8km mark, the front runners were already making their return journey. It was a bit demoralising watching the rest of the group pass me going in the opposite direction. The tenderness I had nursed in my right foot since SCSM (Standard Chartered Singapore Marathon) was starting to hurt, and my footfalls were heavy. I caught up with BT at the U-turn then started to lose her again. As I turned back into the city we saw the residents giving alms to the monks by the road side. This isn't something we see a lot as tourists. 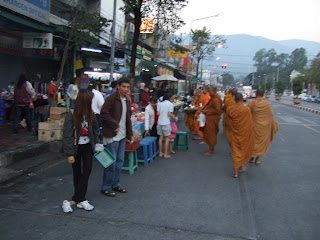 Nearing the last 5km I became disoriented. I followed a lady runner into turning down an unfamiliar road. There was a sign but no marshal. At some point I thought I might have made a mistake and started to backtrack. Fortunately some thai runners put me back on track. My own fault, really for not familiarising myself with the run route. Ah, finally, the beautiful finish line. I put aside the pain and ran for it, collecting my medal as I passed.
.
My friends greeted me but surprise, BT was not there yet. Where did she go? A few minutes later she came into view. It seems she had missed the turn entirely until some race officials on motorcycles stopped her. One of them gave her a ride back to the right road and she continued the run, robbed of her lead over me :-) 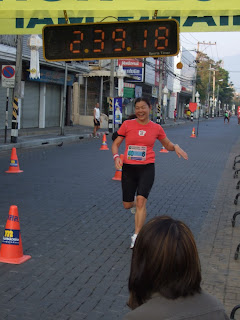 BT coming in, after getting lost near the finishing point. 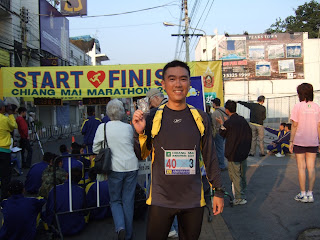 CH completed the race before BT! 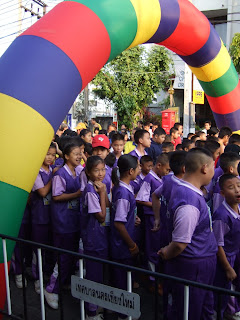 Post race
We arrived just as the kids' run and walk-run segments were assembling. The other friend who had been wrongly placed in the 10k event had come in 5th and won herself a trophy, so for once we stuck around for the ceremony.
.
I found time to inspect my finisher medal and it was a handsome design with ornate Thai styling, the royal crest in red, white and blue on one side, and some historical figures on the other. We also helped ourselves to the food: chicken rice in foam boxes, bananas and water melon while waiting for the prize-giving ceremony.
.
We chatted with a Kiwi lady working in Thailand who came in 4th for the half marathon. During the prize giving, we noticed how small the race was: a young foreign woman who finished behind me actually won a trophy too. No wonder she looked a bit sheepish on stage.
.
In all we had a great time at the event. The race administration could use some improvement, but the easy, friendly manner of the Thais helped us get over that quickly. 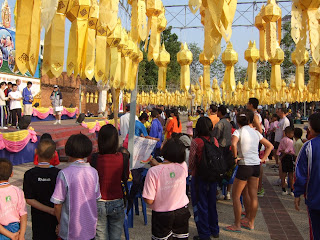 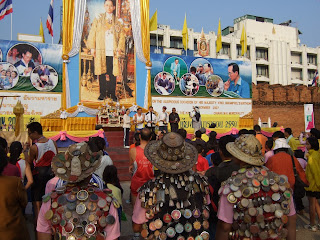 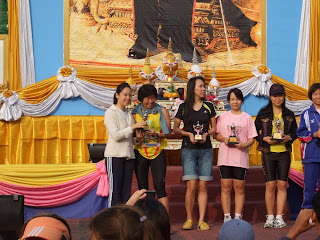 Hi!! Wow!! It looks like you had a great time at the marathon! The pictures are great! Sorry to hear that you got lost but the most important thing is that you participated and had fun :)

I have a question, what is a kiwy lady? "with a Kiwi lady working in Thailand"

Ha ha, the Kiwi lady is a New Zealander. They're also known as kiwis. She's a language teacher in a small town near Bangkok and biy, can she run! She started behind all of us and I saw her went past me and disappeared way ahead. When I started speaking to her after the run, I found that she had a glass splinter in her foot which was causing her much pain, yet she ran so well! She's a triathlete too.

I really enjoyed reading that post and looking at the pictures.
Well done!

Congrats, Blur! Nice job. I have to start running. Knee pain be damned!

He's a good reporter :-) I should make him do more reporting in future ;-D