All the traveling and running had taken a toll on my old body. By Monday, I was completely lifeless and was skeptical if I could handle the adrenalin-charged day ahead of us.

The van picked us up at 9.30am for our white water rafting adventure at the Mae Tang river - Thailand’s most famous and fastest white water river about 80 km out of Chiang Mai. I was almost too tired to utter a word throughout the 2 hour journey.

We made a short stop at the local market for some supplies. 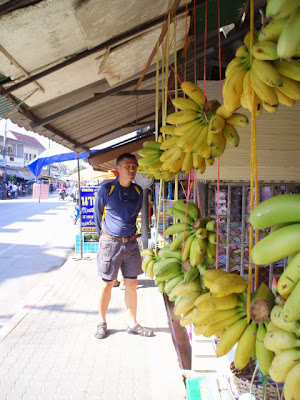 Bananas and squid heads for sale at the local market. 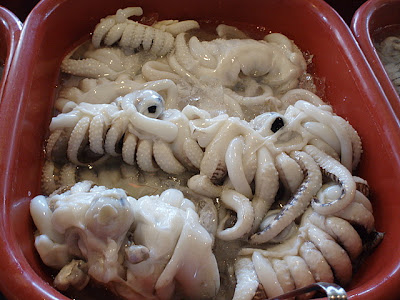 The second half of the drive saw our van making an arduous ascent up a snaking valley on a rugged dirt track to a charming hilltop shack.

We were fed a nice lunch of fresh salad, fried chicken and spring rolls to power ourselves up for the exhilarating challenge ahead. I felt revitalised after lunch, maybe energised by the sight of many cute doggies hanging around and the prospect of being tossed about in the rough rapids soon after. 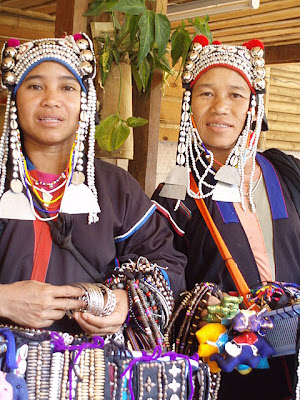 The hill tribe women were hawking jewelry at the shack. 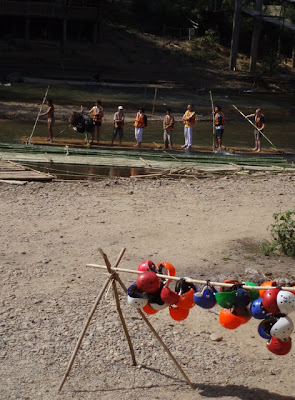 We saw some people traveling on bamboo rafts along the river. 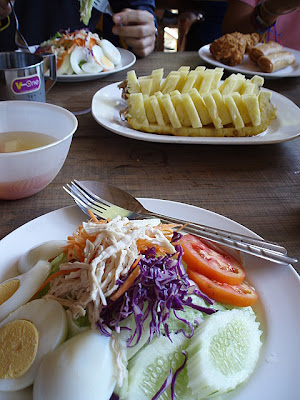 A power lunch before the adventure.
At the post-lunch/pre-launch briefing, we were told that the 3-hour rafting adventure would take us through 10km of verdant jungle and towering mountains with a skipper at the helm of the raft throughout. We were given a serious safety briefing and tutorial on how to react to the skipper’s commands. “Paddle forward! Back paddle! On the job! Get down!” and were assured that the water today wasn’t rough (only level 3) and the rescue teams were already in place at the rough spots. 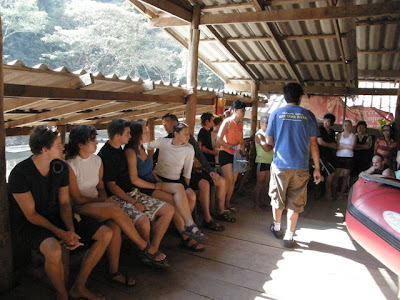 Decked out with helmet and life jacket, we set off in groups, each team heading to their assigned dingy. As we pushed off, we drifted off along the gentle river, practising our paddling before hitting the big one. 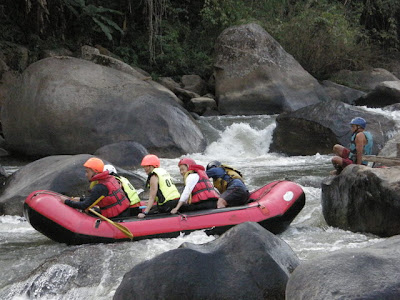 Very soon, we hit the first major rapids. We could hear the thunderous water sound ahead and braced ourselves for our first downward plunge! I screamed the loudest as we plunged through the churning waters surrounded by huge boulders. We felt an exhilarating rush as our dingy thrashed about and let out a big sigh of relief only when we coasted to calmer waters.
.
Before I could start to relax, the dingy started moving faster again, signaling a steep gradient ahead. With barely any time to react, we had to move desperately as the skipper barked commands in rapid succession. 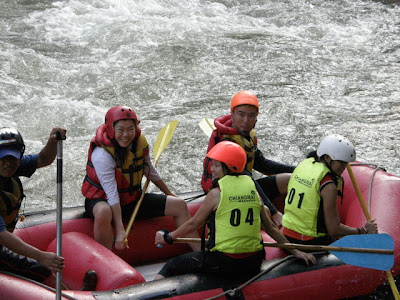 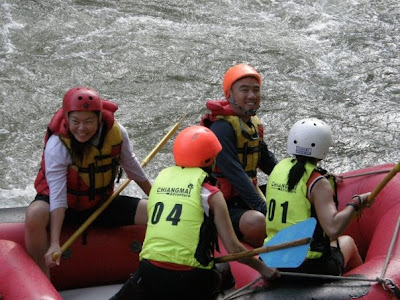 Everything happened so rapidly on a rapid. Water poured into our dingy, my aunt landed on my lap and I was avoiding huge rocks around me.
.
Though it was pretty stressful, we were enjoying ourselves tremendously. We tumbled down a series of milder rapids, soaking in the awe inspiring scenery around us. I turned around to ask the skipper “I hope we have no more big ones to tackle?” He said “No, the BIG ones are ahead.”
.
Oh no! True enough, we saw the other teams waiting in line for their turn at the most lively stretch of the river. I cringed as we watched them go down the powerful downstream. One dingy flipped and the entire group fell into the water only to recover and get back into the dingy very quickly as the water level was not high. 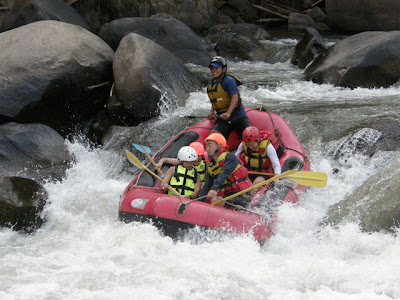 We were soon tackling one rapid after another, interspersed with relaxing recoveries along tamer stretches of the river. The final 2km was so calm, we had to paddle to keep moving. 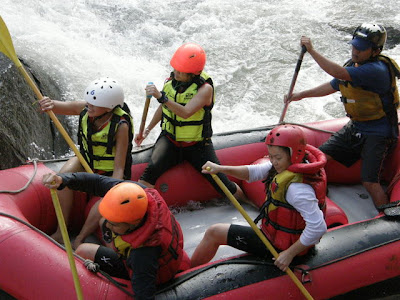 By the time we disembarked, I was revitalized from all the adrenalin rush. Oh man, what an exciting way to end the trip!
Posted by Blur Ting at 18:16

cool Blur! I always wanted to try white water rafting! Oregon is full of those places...ask Mother Hen..I bet she's been to a few!

Belated Happy New Year.
I love your life and all the travel and all the adventure.
I went white water rafting in Nepal in River Bhote Khosi. It was one of the most exhilarating experience....

wanna trade lives for a week? that looks like such fun! but i kniow it would lay me flat for a month with my back . but i would sure love to do it. i have done it a couple times.. in the Kern River in California, back when i was a youngster. :))
fun stuff.. livin on the edge!

JY, I think you're bolder than me. Now that I've tried it once, I probably won't do it again. I'm not really into water sports. I'm sure the ones in Oregon must be awesome. I have seem some of the cascades there!

Hey Water, you can go there with your hubby. We took TigerAir. Not expensive yet nice.

Oh RM, I'm sure you'll love the Level 5 ones during rainy season. Really fast and thrilling! I know you like stuff like this. I won't go near those!!

Soul - I really wish you could do this again since you loved it before. Not to worry, let your back recover first. I've known people who pick up marathon running and other sports when they're way older than you are. You'll get better!

Amel, to be honest, if not for the courageous 3 others in my team, I wouldn't have the courage to do this. Plus they need at least 4 people on board a dingy. I can't let my friends down. It turned out to be really fun and not that scary!

Wonderful pictures!! I loved them all and especially liked the one of the tribe women! They reminded me of the Maya women in Guatemala :)

Rafting looks really exciting! I want to give it a try one day! :)

Have a wonderful weekend!

I felt exhausted and excited just looking at the pictures!
What an adventure!

Its quite ...nerve-wracking and exhilerating at the same time, isn't it. I once white water rafted through the Royal Gorge in Colorado after a season of heavy snowfall. They were level 5 rapids, and I was terrified. But I did feel a significant sense of accomplishment after the fact.

fun! wonderful pictures. my fave is the helmets on a stick.